Unprecedented Crime. Is Trudeau Running Out of Time? 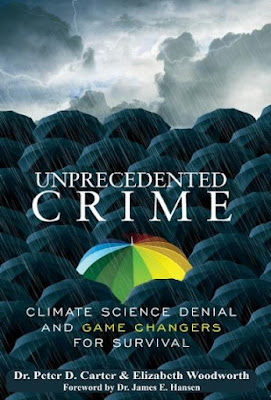 Will Justin Trudeau and our other petro-pols eventually be prosecuted for crimes against humanity? Are they writing their own ticket to the prisoners' dock? If you find that hard to imagine, even impossible, you may think just the opposite in another five to ten years.

Climate disruption is now upon us. New research published in Nature Communications finds that the most important agricultural region of China could become uninhabitable in just a matter of decades. The dreaded "web bulb 35" is becoming a reality.

Once the WBT reaches 35C, the air is so hot and humid that the human body cannot cool itself by sweating and even fit people sitting in the shade die within six hours.

The research, published in the journal Nature Communications, found fatal WBTs of 35C would strike the north China plain repeatedly between 2070 and 2100, unless carbon emissions are cut. Shanghai, for example, would exceed the fatal threshold about five times and the “extreme danger” WBTs would occur hundreds of times. Even if significant carbon cuts are made, the “extreme danger” WBT would be exceeded many times.

Previous research by Eltahir and colleagues showed that the Gulf in the Middle East, the heartland of the global oil industry, will also suffer heatwaves beyond the limit of human survival if climate change is unchecked, particularly Abu Dhabi, Dubai, Doha and coastal cities in Iran. The fatal 35C WBT was almost reached in Bandar Mahshahr in Iran in July 2015, where 46C heat combined with 50% humidity.

The scientists also analysed south Asia in 2017 and found it too is at risk of killer 35C WBT heatwaves in places. Even outside the extreme hotspots, three-quarters of the 1.7bn population – particularly those farming in the Ganges and Indus valleys – would be exposed to “extreme danger” levels of humid heat towards the end of the century.

So, why would Trudeau and those like him face a lifetime stay in the Greybar Hotel? That is addressed in a new book, "Unprecedented Crime," by two British Columbians, Dr. Peter Carter and Elizabeth Woodworth.


In 2017, the heat waves, extreme wild fires, and flooding around the world confirmed beyond doubt that climate disruption is now a full-blown emergency. We have entered Churchill's "period of consequences", yet governments have simply watched the disasters magnify, while rushing ahead with new pipelines and annual trillions in fossil fuel subsidies. Governments simply cannot say they did not know. The events we are seeing today have been consistently forecast ever since the First Assessment by the Intergovernmental Panel on Climate Change, which was signed by all governments back in 1990, which The Lancet has described as the best research project ever designed. Unprecedented Crime first lays out the culpability of governmental, political and religious bodies, corporations, and the media through their failure to report or act on the climate emergency. No emergency response has even been contemplated by wealthy high-emitting national governments.

Extreme weather reporting never even hints at the need to address climate change. It then reports how independently of governments, scores of proven zero-carbon game changers have been coming online all over the world. These exciting technologies, described in the book, are now able to power both household electricity and energy-dense heavy industry. We already have the technical solutions to the CO2 problem. With these solutions we can act in time to reduce greenhouse gas emissions to near-zero within 20 years. These willful crimes against life itself by negligent governments, oblivious media and an insouciant civil society are crimes that everyday citizens can nonetheless readily grasp - and then take to the streets and to the courts to protest on behalf of their children and grand-children. This thoroughly researched and highly-documented book will show them how.

MAHB, the Stanford-based Millennial Alliance for Humanity and the
Biosphere, offers another review of Unprecedented Crime:

Unprecedented Crime devotes the opening half of the book to deftly arguing that climate denial is not just immoral, that it is a willful act of global-scale violence, an unimaginably senseless and cruel act of climate battery against today’s vulnerable, and dispossessed, a fate which will surely only deepen and become dire for today’s youth and future generations. It is a ‘policy breakout’ book deserving to be prominently placed on multiple library shelves from public health to climate adaptation to corporate criminology.

...While the definition of evil may change over time, as most governing parties anywhere in the world refuse to prohibit extraction of the oil and gas on their doorstep or fossil fuel imports due to the climate trivialization work of deniers and hydrocarbon-trafficking lobbyists, the authors ‘name and shame’ the deniers (and aiding and abetting bankers, media, shareholders and politicians) as among the evilest, downright dirty, and irredeemable corporate villains in the history of humanity.

...Only a fool keeps on appealing to the better nature of a deaf thug, hence Carter and Woodsworth do not expect much more than the expected ongoing manufactured rage and lies of deniers, and the betrayal and treason of the political establishment.

...To that end, these climate crimefighting authors controversially support the creativity, gumption and grit of greater civil unrest and civil disobedience necessary to get reticent world leaders and their citizenry to urgently respond to the Paris Climate Accord 1.5 C guardrail dying of Trump’s toxic political malabsorption, and Canada’s Trudeau threatening genocidal relapse into genteel apartheid for non-consenting indigenous communities confronting the tarsands and new pipelines. Rest assured, history is not going to judge these leaders well.

Again, the real crime and legacy of unutterable shame is corporate and elected deniers suggesting indigenous and settler water protectors in our slowly decolonizing world commit a crime opposing new fossil fuel expansion (or the authors do by exposing planetary corporate ecocide and calling for concerted resistance, instead of rightfully receiving a civil courage award for their book).

Changing lifelong loyalties and habits is never easy, (especially if we’re still locked into a vexingly circular ‘glass half-full or half-empty of bitumen’ climate debate; as it turns out this shale bitumen barrel has no bottom) but is necessary if we want to have a habitable world for our gravely at-risk children and grandchildren.

Are these really crimes against humanity? Absolutely. Is there a politician in Canada who can wash his/her hands of them, say they didn't know? Of course not, that's rubbish. What possible defence is there to a politician who ignores the science, defies protests, and instead promotes the extraction, transmission and export of the world's filthiest, highest-carbon ersatz petroleum - as much as possible, as rapidly as possible - into a world already in the throes of climate disruption on a increasingly lethal and global scale?

We quite rightly revile those who have flooded our cities with killer drugs such as opioids and fentanyl. They put lives at risk for financial gain. They kill one unsuspecting user at a time. Our leaders, in our country's name and on our behalf, are setting up something infinitely worse and massively more lethal and, like the fentanyl dealer, they too are chasing political and economic advantage.

Maybe the WBT is the way to reduce population. That, plus recreational sex instead of procreational activity should return the densification of humanoids to a more manageable level.


WBT is not the way to reduce population, John. It destabilizes countries, forcing them to take any number of potentially catastrophic options. There is an almost irresistible temptation to blame "the other." As I wrote the other day, the chief justice of Pakistan is blaming the country's dire water shortages on an "international conspiracy." That's scary talk coming from a senior official on an already destabilized country that has a significant nuclear arsenal.

If the Chinese do lose all or part of their breadbasket region, who will get the blame? Perhaps the major emitters of the 19th and 20th centuries? Hey, that's you John. You and me and the entire peoples of the developed nations. What then?

Greybar Hotel? I doubt it. More likely there will be scenarios such as those lead by Robespierre, Pol Pot and Lenin. Those presently in power, even at the fringes, will be lucky to keep their heads.


The thought has crossed my mind, with real dread, Toby. That could happen if civilization yields to some sort of chaos.

Jr. may be a few cards short of a deck but folks like Butts know better.

No wonder the "progressive" milquetoasts of the world lose to the tRumps, the Fords etc.
(Even Scheer seems to be competitive, whodathunkit )
(Blame the Ruskies?)