It's a Fair Question, One Our Government Should Be Answering. 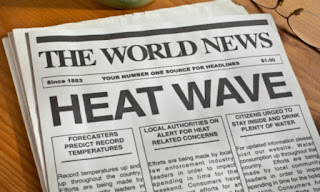 Fifty plus dead in Quebec. As many, perhaps more in Ontario (but who's counting?). And, around the world, no one knows for sure, not yet. It's a scorcher.

Record high temperatures have been set across much of the world this week as an unusually prolonged and broad heatwave intensifies concerns about climate change.

The past month has seen power shortages in California as record heat forced a surge of demand for air conditioners. Algeria has experienced the hottest temperature ever reliably registered in Africa. Britain, meanwhile, has experienced its third longest heatwave, melting the roof of a science building in Glasgow and exposing ancient hill forts in Wales.

The World Meteorological Organization (WMO) said the rising temperatures were at odds with a global cyclical climate phenomena known as La Niña, which is usually associated with cooling.

...Even when the sun goes down, night is not providing the cooling relief it once did in many parts of the world. At Quriyat, on the coast of Oman, overnight temperatures remained above 42.6C, which is believed to be the highest “low” temperature ever recorded in the world. Downtown Los Angeles also saw a new monthly July minimum overnight record of 26.1C on 7 July.

Globally, the warmest year on record was in 2016, boosted by the natural climate cycle El Niño. Last year, temperatures hit the highest level without that amplifying phenomenon. This year, at the other cooling end of the cycle, is continuing the overall upward trend.

Swathes of the northern hemisphere have seen unusually persistent warmth due to strong, persistent high pressure systems that have created a “heat dome” over much of Eurasia.

“What’s unusual is the hemispheric scale of the heatwave,” said Michael Mann, director of the Earth System Science Center at Pennsylvania State University. “It’s not just the magnitude in any one location but that high temperatures are being seen over such a large area.”

Just look at all the records we're setting and in consecutive years - highest El Nino year, hottest Enso-neutral year, and now, in what should be a cooling, La Nina year, another record.

The thing is, this is your new normal. Normal for now, at least. Who knows what normal is going to be in ten years, twenty years or more?

I'm so grateful our government is racing all out to wean us from fossil fuels and transition Canada into alternative clean energy. We're going to need a massive amount of clean energy just to cool ourselves in the summer and warm ourselves when those Polar Vortex fronts sweep through in winter.

What's that? We're not in a race to transition from fossil fuels? We're actually trying to ramp up the production and export of high-carbon bitumen - despite all the warnings of climate scientists? And our provinces - Alberta, Saskatchewan, Ontario and now Prince Edward Island - are uniting to oppose even basic carbon pricing?

Why isn't Ottawa talking to us about what's in our short- and mid-term future? Would that make them look like monsters for their single-minded pursuit of bitumen exports? How many of us have to die before they change? And what about the people who already live in heatwaves well into the upper 40 degrees Celsius? How many of them have to die before we stop promoting the greenhouse gas emissions-rich bitumen?

Of course by the time Trans-Mountain is over, we may be too.
Posted by The Mound of Sound at 8:18 AM

Who knew p*ssy-grabbing was an actual thing?

Well...could it be if Government does nothing about climate change then half the population will expire....is that a good way to get rid of over population? Anyong


Anyong, it's a terrible way to cull the population. Those with the lion's share of culpability for creating the problem are those who will be the last and least impacted. Those who have done the least to contribute to the problem take it in the neck. What aspect of "good way" do you find in that?

Bear in mind that, by the time that "half of the population" expires the same fate will be ordained for much of the remainder, if not directly from climate change then from war or other impacts. Remedial efforts will be too little, too late.

.. will see if I can find a recent link Mound. It pertains to export of Alberta Dilbit & why its an endangered species. Synopsis - the new supertanker port in New Orleans is designed to take 2 million gallon VLCC supertankers to Asian ports and can discharge incoming supertankers while loading them. Even Houston cannot match that. The lower cost to transport energy versus four slower 555 thousand gallon suoertankers out of Vancouver, is obvious to foreign buyers, not to mention the difference in quality between Dilbit (western Canada Select - WCS) and fracked American WTI quality oil.. ie 'Benchmart' West Texas Intermediate

Changes to international shipping fuel (bunker fuel) regulations are coming into play as well. My sources maintain that USA - primarily Washington Stste will continue to be Canada's primary market - Dilbit will be piped there as it is now, the valuable diluent refined out for resale and Canada will buy back that plus component fuels, solvents etc at standard industry prices.. or Washington State will sell to the highest bidder, via pipeline or supertankers.

Meanwhile, there is a flurry of actkvity in Kitimat.. land speculators arriving, anticipating an LNG processing plant and port development for supertankers loading from natural gas pipelines from northern BC and Alberta. That would be fracked natural gas and all its related infrastucture and prep (strip right of way for surveying & seismic, heavy equipment trucks, water input lines, power transmission, feeder output lines for the fracking product, whether natural gas or oil, and the inevitable dumping or storage of the various types of toxic well discharge waters, some lf which are permanent)

Geological maps & Energy maps show sources almost perfectly overlay BC and Alberta on a Canadian map.. so if the energy sources, not to mention mineral resources or lumber extraction are maximized, we can can kiss those environments, habitats, water, forests, food chains, species.. goodbye forever - Amen - Add in the disruption and destruction at 'tidewater' (such a stupid euphemism to avoid saying The BC marine coastline) and its environment, peoples, habitat, species, commercial fishing, tourism, etc.. and you have the complete nightmare. Supertankers thrashing in/out of either the Salish Sea - or Hecate Straits - among the most dangerous waters on the entire planet.

And when will the buffalo roam again north of Edmonton? Where the caribou once roamed? You ,now.. over those remediated tar sands tailing ponds that will never be remediated unless we the taxpayers of Canada look after that detail. And the methane and CO2 from what will be in the hundreds of thousand wellheads ? They all leak or release you know. we have cameras and software now that can see it and measure it. Your horseshit salad tastes aweful.. and you are force feeding it to us daily.