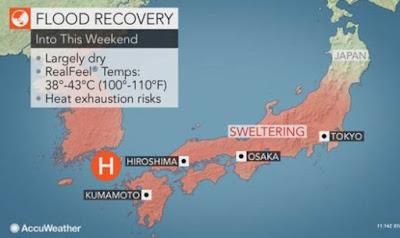 I hear you eastern folks are roasting today. Apparently roads are buckling from the heat. Probably getting used to it, eh? There was a time these heatwaves would have been called "extreme weather" events only they're not so extreme anymore are they? They're the "new normal."

They're ripping it up pretty good down in California too. It's enough that the LA Times is asking, "Climate change is behind the global heat wave. Why won't the media say it?"

They're ripping it up in Japan including the same area where they're still trying to find all the bodies from last week's massive (new normal) flooding.  Ooh, decomposing flesh and high heat - not a good combination, eh? Heatwave toll, so far, eight dead, 2000 in hospital.

Britain and Ireland have been sweltering. They're getting a bit of a break for a day or two but their heatwave is expected to return and be around until into August.

Meanwhile, it's hurricane season and it's shaping up to be a ripper too.

All this has already led to several cyclone disasters in a season that’s just getting started.

In May, Cyclone Mekunu struck Oman, bringing two years’ worth of rainfall in a few hours and creating a huge swath of temporary lakes in one of the driest deserts on Earth. This week, more than 600,000 people were evacuated in China’s Fujian province before Typhoon Maria made landfall. Meanwhile storm-weary Puerto Rico received a scare from Hurricane Beryl, before it fizzled shortly after reaching the Caribbean.

Earlier this month, Typhoon Prapiroon kicked off a record-breaking torrential downpour in southern Japan. More than 70 inches of rain have fallen — about four-months worth in 11 days — a precipitation level on par with what Texas experienced during Hurricane Harvey last year. More than 200 people have died so far as a result, and the damage is so widespread that Japanese officials are comparing it to the 2011 earthquake and subsequent tsunami.


That was a moving essay, Deacon. I have one daughter now who is wrestling with whether to have a child. I've made it plain that it's their decision but I hope they will take today's conditions and tomorrow's into account and be prepared to sacrifice to ensure that child's needs are met as best as possible.

They could head north. Lots of room in Fukushima.