It's Easier When You Think of It as a Form of Retardation.


One of the side effects of becoming a petro-state, a purveyor of fossil energy whether oil, gas and/or coal, is the political retardation factor. Since climate change became a recognized threat, every Canadian government, Tory and Liberal alike, has succumbed to carbon-retardation. It has made them imbecilic, even moronic.

And, yes, Justin Trudeau has carbon-retardation. He's neck deep in it. Gotta move that bitumen and that natural gas and all that coal. Sure, it's destroying the environment and it's probably already claiming lives but, hey, we'll deal with that later, eventually, long after we've squandered all those petro-bucks. Sure.

An interesting and timely article in The Guardian looks at how we can harvest the power of the moon. It focuses on tidal power - reliable, effectively unlimited and, best of all, free.

I like to head down to the beach when we're having a particularly low tide. As I gaze over the exposed sand flats I'm struck by the power of the moon to draw away all that water.  Moon power. That is energy that traces back 4.5 billion years to the collision between a Mars-size planet and Earth. It created a lot of debris, enough to form our moon, that was captured by Earth's gravitational force and has been circling the planet ever since. These tides reflect energy that's 4.5 billion years old. That is so cool. And every watt of that energy for the past 4.5 billion years has been absolutely free of charge.

The left coast is blessed with an abundance of free, renewable energy, ours for the taking.

Prevailing winds from the Pacific bring moisture laden clouds. This is where our several mountain ranges come into play.  Those clouds, trying to head eastward, wind up dumping their moisture as rain on those mountains. Mountains, being high, a few thousand feet or more, concentrate that rain into gullies. That rain water has potential energy that is transformed into kinetic energy as it races downhill. It creates the energy needed to drive turbines for electrical generation. Rain, being intermittent, the mountainous terrain facilitates the construction of reservoirs that can then run power plants. There are several environmental problems associated with these dams. Yet it is a major source of renewable, non-carbon energy. That's really good energy when you're recharging your electric car.

In other words we've got abundant hydro-electricity. And we've got wind energy. If you've ever driven (ridden) the California coast you will have seen wind turbines arrayed along ridge lines. Winds get pretty good at higher elevations. Folks who fly sailplanes (gliders) understand the power of "ridge lift." In other words, so long as Earth continues to rotate and the sun warms the seas, we'll have loads of wind power that still is untapped.

So, we've got vast untapped hydro power and wind energy. What else?

The Guardian article focuses on moon power, tidal power. It addresses the incredible tidal bore on the Bay of Fundy. Huge energy there, twice a day like clockwork.

British Columbia has plenty of tidal energy but it's not as focused as the Bay of Fundy. That said, we've got something else. Take a look at this map of Vancouver Island and the mainland.

Look at that stretch of the island between Kokish down to Campbell River. It's a natural Venturi tube, about 150 miles long as the gap between the island and the mainland sharply narrows.  As that gap narrows the currents accelerate the flow rates along that passage. That's all free energy. Free, reliable and clean energy. It's as reliable as the ocean currents themselves.

So, we've got tidal energy, hydro energy, wind energy, and the concentrated energy of the Pacific Ocean current.  Anything else? Why, of course.

There are advantages and a few drawbacks associated with any mountainous territory and British Columbia is mainly mountainous. We are part of the Pacific Rim, a.k.a. the Ring of Fire. Volcanoes and other features bring the heat from the Earth's magma to or near the surface. 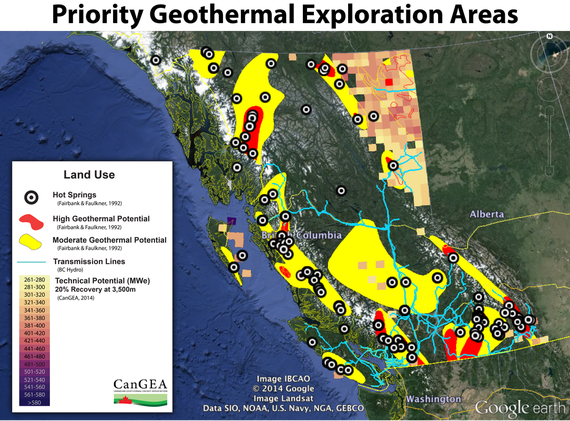 It is estimated that tapping the best sites, about 16 in total, would produce upwards of 3,000 megawatts of constant, free, clean energy.

So with all this near limitless natural, clean, renewable energy waiting to be harnessed, what's holding us back? It's that carbon-retardation thing again and our governments have it bad, really bad. We can meet our needs with clean energy, easy peasy, but we can make money (supposedly) by flogging high-carbon fossil fuels. That's the way Justin Trudeau rolls. That's the way Stephen Harper rolled. That's the way the next prime minister of Canada will roll.

That's what you call "captured" government. And if you don't believe that our federal government has been captured ask yourself why it continues to shower massive amounts of money and in-kind benefits to the Fossil Fuelers, worth upwards of $34 billion a year according to the IMF, while it doesn't invest even a tiny fraction of that into developing our abundant clean energy resources.
Posted by The Mound of Sound at 1:03 PM

The only explanation that I have is that some of the money lavished on the oil and gas industry is marked "return to sender." And by sender, I don't mean the Ministry of Finance.

Can we turned the "captured" government into a government capture and storage system and deposit them all miles underground??


What a delightful notion, Marie. Your assignment is to work out how we're going to do that.

Here in BC our government is also captured by BC Hydro's Site C dam fixation.

When we think about it dispassionately, nuclear needs to be reconsidered. Modern nuclear designs are much safer than the water cooled core systems and can have the added benefit of using the waste from the old plants as fuel. Thorium reactions were tried back in the 1940's and worked but were ultimately rejected because thorium won't explode so it can't be used to make a bomb.

If you move east, the Thompson, Yukon, Mackenzie, niagara and the grand prize, the st. Lawrence rivers using the same technology could provide unlimited amounts of electricity and that doesn't even include all the ones I missed. Underwater turbines have been around over a hundred years but the only engineering needed is to protect fish and other creatures from getting mashed up in the blades. Check out how the Yukon gets its electricity, almost 100 % hydro power until recently as population expanded.


I had left out the "run of river" option, Bill. I tend to shy away from river power because of this feeling that we've already meddled with the river ecology enough. I realize that's just a gut feeling that doesn't go to the merits but it's a feeling I have trouble getting past.

Done right, RoR's not an issue.

Of course, under the Lib's, RoR created "power welfare" for Corporations and privatized thousands of miles of public property with out recompense.

All told though, it's all human nature.

Given a choice between granite countertops or an r-50 airsealed attic, guess which one is more popular. One will save you up to $900 a year on energy bills, the other, make your home easier to sell in 2-4 years, if you picked the right granite.

That there are plentiful alternatives to fossil fuels makes our governments' choices even more difficult to bear, Mound. They still peddle the notion that green energy constitutes some kind of a niche, when the truth is we could be rapidly decarbonizing were it not for the fact that the neoliberals hold sway.

Mound...Shush! Tidal power...Free? Yes...but don't tell government that! They will find a way to tax it. I remember years ago when someone asked me if I used Cannabis. I said no. Not until the government figures out a way to tax it. Now, I will never use it. Why? I can't afford the taxes...I'm on fixed income. Anyong

The biggest issue I have with this post is that when it comes to electrical generation, Canada is already doing pretty good. Hydro covers about 60% of what we use. Fossil fuels are a little over 20% and dropping, and that's almost all coal and natural gas. Petroleum already ranks somewhere around where solar and wind are, so the oilseeds really aren't an issue there.

Where the end products of the oilsands and other liquid fuels do have a stranglehold, is transportation, with mining and agriculture bringing up the rest, and that mostly about motors as well, I would bet. You at least mention charging your electric car, but do you actually have one? Do you know a lot of people who do? Certainly they are getting better, and we are starting to see the infrastructure being built to charge them more places, but they are actually a niche product and it is quite a different thing to completely rework our transportation network compared to our electrical grid. Hell, as I noted, our electrical generation is already in good shape and moving further in that direction. Switching over all of our vehicles and providing the means to charge them all is another matter entirely. Not impossible, but also not cheap or easy.