Will 2018 Be the Year That Reality Sinks In? 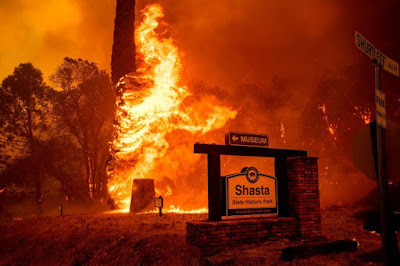 It's in the news, daily. It's everywhere. Heatwaves sweeping the entire northern hemisphere. Wildfires even up inside the Arctic Circle. Floods and flash floods. Drought and flash droughts. People dying here. People dying there. Dozens, hundreds of dead here, there and there.  People displaced in hundreds of thousands.

All this and word that we're just getting started. Basic physics shows us this is going to get worse. So, do we finally get it? Have we figured out that the climate change deniers/footdraggers are actually dangerous, potentially harmful to us and our kids and life on Earth? Are we nearing the point where we're going to see their antics as crimes against humanity? That's what they are.

Every supertanker of dilbit that sails under Vancouver's Lions Gate Bridge is going to make this summer's inferno worse, more deadly in years to come. It's the very stuff of death and suffering - not so much here of course but across the poorest and most vulnerable parts of the world. Our Liberals and Conservatives can ignore it but they can't change that and they're not even going to try. To them, once that armada of supertankers reaches the open sea it's someone else's problem and, in the worst possible way, it really is - someone else's problem.

Remember in the Harper era how Canada was lambasted as a climate pariah? Canada was an international pariah. Yet Trudeau has done more for the Tar Sands and global bitumen trafficking than Harper ever dreamed of doing. I'm sorry Grits but that's a fact, a goddamned fact. This is on you. And it's arguably a crime against humanity.

Trudeau's candle is burning from both ends. The days of the petro-state are numbered and we will be vilified for our choices, our decision to exploit a truly horrible carbon resource for profit leaving the real price - death, suffering and dislocation -  to be paid by others.

Maybe we'll come to our senses. Maybe not. With bitumen stalwarts such as Notley, Kenney, Moe, Scheer and, yes, Justin Trudeau and this Liberal government, the Tar Sands won't go without a fight. Canada will be a greater climate pariah than ever even as the world burns. Woe, Canada.

Or maybe 2018 will be the year that reality sinks in. Maybe this is the year we'll tell Trudeau and his Liberals, Scheer and his Tories, that this deadly nonsense must stop. It's over. The world is on fire. We can't throw matches onto the fire. There's no longer a place for the filthiest, highest-carbon ersatz oil.

We're better than this.
Posted by The Mound of Sound at 11:50 AM

I hope you're right, Mound. Lately, I'm beginning to think that we're not nearly good enough.

We are well past the time when we should be thinking about what kind of planet we are leaving for Keith Richards.

Ms Notely currently suggests some 37,000 jobs will be generated,
as Canada's 1st new pipeline to 'tidewater' will start construction
thereby pumping Dilbit via a twin pipeline to Richmond BC
and 'opening up' the vast Asian markets
Does she have a breakdown re jobs & any source docs or references?
(please don't say Fraser Institute)
There are hundreds of pipelines to reference job numbers
and operating labor numbers once completed

Yet Dilbit will continue to flow via existing pipelines,
to Washington State or Houston
and I have sent you the roundup of the fatal flaw
in this rainbow unicorn belief of Ms Notely, Jason Kenney & Trudeau
550 thousand barrel Afromax Bitumin supertankers
may make the odd trip to Asia via Hecate Strait
and no we do not have a 'world class' cleanup capability
for floating Dilbit or shorebound Dilbit
or a wreck pounding on the rocks of Haida Gwaii
that lost engine power, or steerage or capsized in 35 foot swells
or all of those issues at once

Trans Canada's submission to NEB suggested construction jobs at 1,500
Once up and running a permanent force of some 900

So what we are up against, Mound is the bizzare belief
that Dilbit is the monetary elexir for Canada to grow the economy
Be in the Nation Interest.. and be a Nation Builder
Provide Energy Security For Canadians

So if Ms Notely or the other political pimpers can please clarify..
What exactly will, say uh, 35,000 people be doing in Richmond
once the new twin pipeline is pumping into supertankers..
Will they wave from shore, stare at the pumps, shuffle their feet ?
C'mon Ms Notely - Thirty five thousand high paid jobs
to watch a ship pump Dilbit that is headed to Asian
to reap the astonishing rewards.. of such enterprise .. !

This seems better than Christie Clark and her memorial lake
to ensure already subsidized LNG liquifaction construction takes place
so BC can trade electric power for LNG to Sunoco's consortium
at 1/3rd the cost to produce such power.

Environment, Habitat, Endangered Species, Food Chains
inland and coastal marine be damned.. Canada must export !
Feed the hungry maw of China, India, Pakistan etc
Herring, caribou, orca, boreal wolf, wild salmon.. who cares
You either vote for us.. or for Jason Kenney, or Trudeau
or you are against us.. The Almighty Government & the Queen

Deary me.. there seems some are on hallucinatory drugs
in Edmonton and Ottawa.. and wherever uninformed folk
tend to live or hang out..

35,000 jobs doing what ? I cannot figure out this puzzle
or is it just flawed mathematics ?


And here it is!
!http://www.burnabynow.com/opinion/kinder-morgan-s-relationship-to-western-canada-marine-response-corporation-1.2179208

Re,35,000 jobs doing what ? I cannot figure out this puzzle
or is it just flawed mathematics ?

Math is considered the absolute truth!
I guess a lot of dilbiters failed math.

In it's entire existence, 98 years, only 1 ship loaded with only $80,000 of Alberta Heavy Crude has ever left Vancouver for Asia.

There are no refineries there that can refine Tar Sands Dilbit, and no plans to build any.

As the Climate Change costs mount up and go mainstream, the Carbon Industry has a limited shelf life for infrastructure builds.

They have 5-10 years at best to get them built before they emcounter mass public rejection.

Even now, to push them through against existing resistence, they have to load them up with Site C bullshit exaggerating dollsr, jobs, future, to get a segment of the idiocracy's support.

Will this be the year? Of course not. Not unless you can find a way for professional class North Americans (both liberal and conservative) to keep their SUVs, McMansions, shopping malls and the ability to send little Madison and Austin to only the finest schools. Oh, and try telling China to stop growing economically now that we've sent them most of our manufacturing jobs. I'm sure they'll be happy to pitch right in.