Another Win for FPTP. Another Body Blow for Liberal, Representative Democracy. 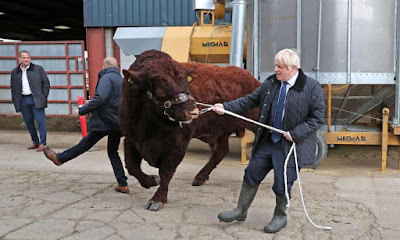 Boris Johnson won a decisive victory in yesterday's British elections. The Tories marched to a massive majority leaving the opposition Labour and every other party a smoking hole in the ground.

BoJo won a powerful majority in the House of Commons - on a minority of votes cast. A majority of Britons (I'm going to miss that word) supported parties that backed a second referendum. The will of the British people was to stay in the European Union but FPTP put paid to that democratic expression.


A line from the old gambler’s lament takes a whole new twist: “Wherever I roll the dice/ The blues run the game.”

Who needs the "consent of the governed" when you can rely on vote-rigging First Past the Post?

p.s. I'm back, for now. My computer, like the newly elected prime minister of Britain, remains deeply unstable.
Posted by The Mound of Sound at 9:01 AM

These are depressing times indeed, Mound. The sun continues to set on a once proud Britain, and it looks like Scotland will have another go at independence, judging by the vote for the SNP. Can Northern Ireland be far behind?

Thank goodness it was only your computer. I was beginning to think you'd lost your sense and gone on walkabout or some such thing.
Glad to hear you're well!


What Cameron hath wrought, Boris will tear asunder. There's bound to be deep unrest with England imposing its will on Scotland and Northern Ireland.

I don't think resurfacing is indicative of mental soundness, John.