We've Got Gas. Right, Who Doesn't? 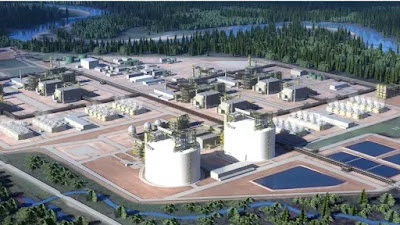 British Columbia's former Liberal premier and grifter-in-chief, Christy Clark, vowed that the province's abundant reserves of natural gas would be our ticket out of debt and deficits.

Even Clark's successor, NDP premier Jim Horgan, has it bad for natural gas. He can't get enough of the stuff.

The problem with natural gas is that there's a glut of it and plenty of jurisdictions have it in abundance. That glut has kicked the floor out of LNG prices.


A decade ago, natural gas was heralded as the fuel of the future. In shale fields across the country, hydraulic fracturing uncorked a lucrative new source of supply. Energy giants like Exxon Mobil and Chevron snapped up smaller companies to get in on the action, and investors poured billions of dollars into export terminals to ship gas to China and Europe.


Chevron, [America's] second-largest oil and gas giant after Exxon, said on Tuesday that it would write down $10 billion to $11 billion in assets, mostly shale gas holdings in Appalachia and a planned liquefied natural gas export facility in Canada. The move was an energy company’s clearest acknowledgment yet that the industry has been far too optimistic about the prospects for natural gas.

...Some analysts said the gas slump could persist for some time because the cost of wind and solar energyhas tumbled in recent years, making those renewable sources of energy more attractive to power producers. And while gas exports are climbing, growing production of the fuel in Qatar, Russia and Australia threatens to drive down international prices over the next few years.

...Gas producers have struggled in part because New York and other Northeastern states have made it harder to build pipelines to transport the fuel. But analysts point to a far bigger problem: The industry is just producing too much gas. In some oil fields where gas bubbles to the surface with crude, it has become cheaper for producers to burn the gas than gather it and send it to market.

“Natural gas is in the tank,” said Patrick Montalban, president of Montalban Oil & Gas Operations. “We’re looking at a project right now of over 200 wells in Montana that are for sale, but they are uneconomic. Not only are the wells uneconomic, the gathering of the gas is uneconomic.”

...In a recent report, Morgan Stanley estimated that demand for natural gas would grow for a few years but fall 13 percent between 2020 and 2030 as utilities increasingly switch to wind and solar power. Future regulations or a carbon tax put in place by lawmakers worried about climate change could accelerate the transition to renewables.

Exports offer perhaps the greatest growth potential for American natural gas. But even as companies build more liquefied natural gas export terminals across the Gulf Coast, competition from Russia and Qatar is intensifying and analysts fear there could soon be a global glut of gas.

The Canadian venture that Chevron's looking to ditch? That's the proposed LNG plant in Kitimat. The American giant took a 50 per cent stake in that project and now just wants to unload it.

In late June, finance minister Bill "Job Churn" Morneau announced that Ottawa was chipping in $275 million fossil bucks for what he boasted was the "largest private sector investment in Canadian history."

If our various governments would stop subsidizing carbon we would see marginal projects cease operations. If only . . .

it seems that the taxpayer can no longer subsidise these projects to success; unless your in Alberta!

Even the big guys, Chevron, Shell and others cannot or are unwilling to leverage these projects to completion.

Alberta's wealth was built upon income tax not royalties.
BC would seem to be heading in the same direction.

It would mean civil war to end those subsidies, Toby. Our government admits to just a fraction of the real value of those subsidies, content to write off "natural capital" and other benefits. Why? Because, as you point out, if we weren't so willing to cook the books most of these projects would shut down.


TB, perhaps it is a blessing in disguise that these ventures fail before BC acquires the Alberta Disease, a "money for nothing" ethos.

BC's been there done that with fishing and forestry.
A telling sign of a failing industry ,one that's been raped , is that the Feds give large chunks of it to the first nations.
My guess is that the Trudeau pipeline is going to be offered.

If there are viable natural gas deposits in BC (which is doubtful), why would we not use it here in BC as a transport fuel, etc?

"If there are viable natural gas deposits in BC (which is doubtful)" ????

Really, I find this the most obtuse post I've seen in some time!

There must be natural gas a plenty for the Kitimat LNG terminal to make sense in the first place, wouldn't you think? Wakey, wakey.

Chevron pulling out of the LNG terminal project just means they can't see a way to make obscene profits on it for the immediate future. I mean, it's not like either BC or Alberta actually charge meaningful tar, oil or gas royalties, so the product from fracking in northeastern BC is near enough free. We happily give away Canada - our public wealth of resources, to anyone willing to cart it away, in return for a pitifilly small number of operating jobs. But there's such a glut of methane (natural gas) even us giving it away free doesn't excite the corporate petro world.

Why would any sane investor (of the normal noliberal style) build retail infrastructure to fuel transport with natural gas? The world is changing over to hybrids and EVs. Building retail natural gas stations for the few vehicles who'd use it is expensive. For no profit, probably guaranteed loss, and disapproval from a greening citizenship.

Inform yourself and have a good think.

The gas needs to be fracked, though? Is fracking viable?

How many billions of liters of H2O would be polluted for fracking?

Fracking for natural gas in N. BC appears to go ahead only with subsidies from Govt: low royalties, drilling credits, cheap electricity from BC Hydro. Apparently not viable without massive subsidies.

Part of that electricity would come from the $15 billion Site C dam, paid for by publicly-owned BC Hydro. Which will cause our hydro bills to rise even faster. Just to provide 'clean' power for fracking/LNG projects whose benefits are dubious, and which have large environmental impacts.

Obtuse BM? Give your head a shake!
Perhaps Chevron was listening to the hyperbole Chrispy was spouting. What, a trillion dollar Heritage Fund? In her eyes only! Perhaps.
If the sheeple, and their 'Political Leaders' would wake up and sniff the roses they would realize that the ONLY way LNG (and Kitimat LNG) could possibly be economically viable would be for royalty free gas, almost free electricity, subsidized access, drilling costs and transport, and then only if the other players dropped out.
This is obvious to me, and I'm only slightly more educated than Chrispy (I didn't go to the Sorbonne or Cambridge).
Obtuse? Really!


Chevron and others were drawn to LNG on an expectation of a profitable world price. As doubts surfaced governments offered buffer after buffer - at the public expense.

We anticipated that we could steal a march on the potential competition and ink our deals before they reached market. We were wrong.