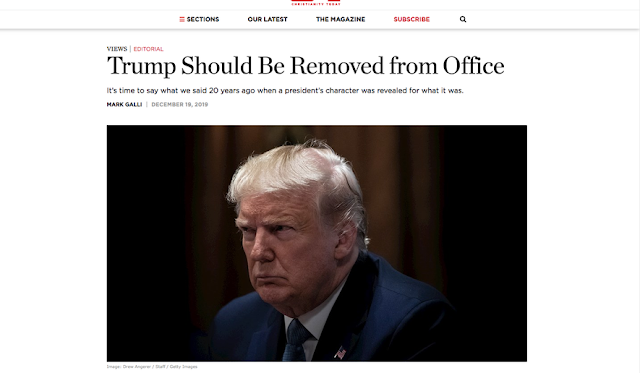 Its roots go right back to its founder, Billy Graham. The magazine, Christianity Today, is calling for Donald Trump's impeachment and removal from office and it isn't pulling any punches.

The editor-in-chief, Mark Galli, wrote: “The facts in this instance are unambiguous: the president of the United States attempted to use his political power to coerce a foreign leader to harass and discredit one of the president’s political opponents.

“That is not only a violation of the Constitution; more importantly, it is profoundly immoral,” he wrote.

“We believe the impeachment hearings have made it absolutely clear, in a way the Mueller investigation did not, that President Trump has abused his authority for personal gain and betrayed his constitutional oath,” Galli continued. “The impeachment hearings have illuminated the president’s moral deficiencies for all to see. This damages the institution of the presidency, damages the reputation of our country, and damages both the spirit and the future of our people.”

“He has hired and fired a number of people who are now convicted criminals,” Galli wrote. “He himself has admitted to immoral actions in business and his relationship with women, about which he remains proud. His Twitter feed alone – with its habitual string of mischaracterizations, lies, and slanders – is a near perfect example of a human being who is morally lost and confused.”

“To the many evangelicals who continue to support Mr Trump in spite of his blackened moral record, we might say this: remember who you are and whom you serve,” Galli wrote. “Consider how your justification of Mr Trump influences your witness to your Lord and Savior. Consider what an unbelieving world will say if you continue to brush off Mr Trump’s immoral words and behavior in the cause of political expediency. If we don’t reverse course now, will anyone take anything we say about justice and righteousness with any seriousness for decades to come?”


h/t Trail Blazer
Posted by The Mound of Sound at 8:45 PM

This news is going to create much confusion within the USA.
The shit has at last hit the fan.

Many thanks for the heads up, Trail Blazer. I do hope you're right but my readings into the incestuous relationship between the Christian right and the extreme political right in America gives me plenty of cause for concern.

It won't surprise Trump's evangelical supporters that the deep state has targeted one of their publications. There may be a George Soros connection too.

Did I just see John B attempt to discredit this article by inferring that it is a HIT PIECE by the DEEP STATE ? Try finding a very big rock, and hold on real tight. Use it to either ground yourself in reality (a.k.a as Truth/facts - or crawl under it so the alternative reality/ Conspiracy theories that require darkness to blind oneself.

I think John B.'s comment was snark. Snark with an important lesson attached.

Yes, Anon. John was retorting satirically. He is "taking the piss."

WTF!
Billy Graham will continue rotting in his grave.


As shall we all, sooner or later, my friend.