This Sounds Crazy But, Hey, It's Climate Change 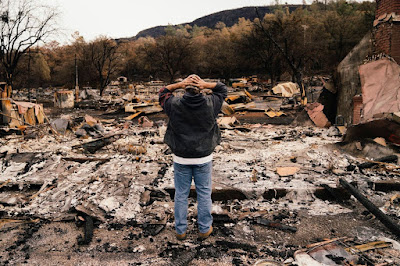 Few know the reality of climate change better than the insurance industry. Insurers have to sell policies. If they don't, they put themselves out of business. They have to set premiums large enough to cover anticipated claims while still making some profit. They've got teams of actuaries whose only job is to work out risks.

Places like California are an insurer's nightmare. Homeowners there are unusually vulnerable to wildfire losses (except in the rainy season when those fire swept areas are susceptible to mudslides).

So what to do? A lot of insurers would like to stop incurring these worsening risks. They've been pulling coverage in the more fire-prone areas. That gets the homeowners upset. The homeowners get the politicians upset. It's the actuarial "circle of life."

On Thursday, however, California took the highly unusual step of banning the practice, a decision that exacerbates the insurance industry’s miscalculation of the cost of climate change.

The new policy imposes a one-year moratorium, preventing insurers from dropping customers in or alongside ZIP codes struck by recent wildfires. The moratorium covers at least 800,000 homes around the state. The state has also asked insurers to voluntarily stop dropping customers anywhere in California because of fire risk for one year.

“People are losing insurance even after decades with the same company and no history of filing claims,” Ricardo Lara, California’s insurance commissioner, said in a statement. “Hitting the pause button on issuing non-renewals due to wildfire risk will help California’s insurance market stabilize and give us time to work together on lasting solutions.”


In a survey of 27 state insurance regulators this year, the consulting firm Deloitte found that just four states said their insurers were “fully” or “largely” prepared to respond to the risks of climate change. The danger of insurers being overwhelmed by worsening natural disasters “is very real,” Deloitte wrote in its report.

...After two years of extreme losses, it is clear that California’s insurers are struggling to prepare themselves for a new era of accelerating climate risk, according to interviews with insurance executives, academics and regulators. New research shows that the wildfires of 2017 and 2018 alone wiped out a full quarter-century of the industry’s profits. Last year’s Camp Fire was the costliest disaster anywhere in the world that year, according to the insurer Munich Re.

In 2018, the giant German re-insurer warned that increasing losses could cause insurance premiums to become unaffordable for many homeowners.

“If the risk from wildfires, flooding, storms or hail is increasing then the only sustainable option we have is to adjust our risk prices accordingly. In the long run it might become a social issue,” he said after Munich Re published a report into climate change’s impact on wildfires. “Affordability is so critical [because] some people on low and average incomes in some regions will no longer be able to buy insurance.”

Nicolas Jeanmart, the head of personal insurance, general insurance and macroeconomics at Insurance Europe, which speaks for 34 national insurance associations, said the knock-on effects from rising premiums could pose a threat to social order.

“The sector is concerned that continuing global increases in temperature could make it increasingly difficult to offer the affordable financial protection that people deserve, and that modern society requires to function properly,” he said.

Munich Re’s insurance cover in hurricane-prone regions such as Florida is already higher than in northern Europe, by an order of magnitude.

This has a variety of impacts on the real estate markets. Soaring insurance costs lower property values. New buyers or anyone else needing mortgage financing will get turned down by lenders unless they maintain adequate insurance coverage.  Money they have to pay insurers is money they don't have available to pay the people trying to sell their homes. Worse yet, if your property becomes uninsurable it can become almost worthless. Most people's homes are their biggest asset. Oh dear.
Posted by The Mound of Sound at 12:00 PM

How can this be? Climate change is a Chinese hoax and the free market will always deliver an optimum solution! I'm calling fake news.


This is the free market solution - "No more insurance for you, buddy. Get lost."

This introduces an interesting dynamic in governance - pissed off voters. When the private sector called it quits on flood and hurricane insurance along America's eastern seaboard, FEMA stepped in. It became the insurer of last resort.

FEMA quickly found the premiums were far short of the payouts. Congress moved to make the insurance programme a break-even operation. That sent premiums up, way up. Those good old boys went ballistic and howled at their 'free market' congresspeople. Fearing the wrath of the voter, Congress backed off and reinstated that free-market solution - socialism.

The signs are clear. And we continue to misread them.

We only call it "socialism" when it's for somebody else. And in that case it's quite evil too.

Yeah, Owen. We've got a bad case of "not-just-yetitis"

Yes, John, it is an "eye of the beholder" sort of thing.