Tucker, Mr. Trump Isn't Going to be Happy About This. 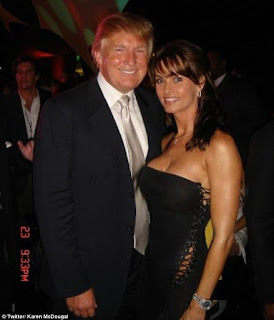 Where is Michael Cohen now that Trump needs a man with his skills set? Oh, that's right. He's in prison.

With world leaders caught laughing behind Trump's back, the last thing he needs for Christmas is a return visit from former Playboy playmate, Karen McDougal.

Only Karen is back, thanks to a careless remark by FOX loudmouth, Tucker Carlson, who claimed she “approached Donald Trump and threatened to ruin his career and humiliate his family if he doesn’t give them money.”

McDougal has filed suit in a New York state court for defamation. FOX has said it will vigorously defend the claim.

The former playmate has dished the dirt on Trump in lurid detail. She even said that the impassioned couple shagged in Trump's apartments in Trump Tower while Melania was off somewhere recovering from the birth of their son, Barron. Nice touch, Don.

With a disastrous NATO summit behind him, the Americans backing out of the UN climate accord, Congress about to impeach his narcissistic ass, and his poll numbers flagging, a rehash of his affair with Karen McDougal might just drive Trump to despair.

.. the howler to me is the fervent adoration of Trump by the evangelicals of America and a strange but huge segment of the ignorant and/or the uninformed or misinformed. A small but powerful fervent adoring defender sector is of course the GOP.. Republican political animals - elected and unelected & their donors, pundits, captured or extreme mainmedia (like Tucker Carlson, Alex Jones, Sean Hannity, Bannon, Gingrich et al) Oddly its this last GOP sector that actually includes evangelicals, the ignorant, the uninformed.. or just plain twisted lying assholes & pus sacks like Mitch McConnell, Leslie Graham, Barr or Devin Nunes. Some like Roger Stone are headed to prison over their fervor either for Trump or money. Giuliani is now in way over his head.. but still the fervor rages in the hot blood of the Birther Believers & annointed by Gawd Trump Cult.

It would be great to hear and read more about Trump's weiner and its use I guess. At least it would be titillating.. a pleasant change from the daily blather, bluster, vanity and self vindication sob stories of The Great Winer.. the hardest done via by the evil 'fake news'.. and the almost weekly accounts of Trump defeats in the courts. For a guy who runs a fantasy mill on his great wealth and splendour.. he sure don't want anyone to know where he got any of it.. or just how great or splendiferous is or is not. So yes.. Trump has my support to being revealed in full, as the Supreme Commander of His Own Misfortune.. including all his boasting, his capering and fondling or fornicating with any girl or woman who would tolerate it, had little or no choice.. or did him for cash.

Strange how it all comes around in the end.

No matter what anyone thinks of Prince Andrew, Trump's lechery leaves no doubt that his relationship with Epstein was, as some of the girls assert, fruitful.

As for the witless Evangos, they'll believe whatever the con artist at the pulpit tells them to believe. In Trump's case the line is that, no matter how sullied his past, he's an instrument of their gawd and, as such, to be venerated as somehow holy.

This perverted relationship between the evangelical fundamentalists and the far right is thoroughly explored and documented in Kevin Phillip's "American Theocracy," Chris Hedges "American Fascists," Andrew Bacevich's "The New American Militarism," and Kevin Kruse's "One Nation Under God."

"One Nation" is the most recent book. In it, professor Kruse traces their pact back to post-Depression America and FDR's 'New Deal.' America's industrialists were pariahs, deeply loathed. They wanted to fight back against what they saw as Roosevelt's socialism. They couldn't do it directly so they seized on the idea of joining forces with then popular radio fundamentalist preachers who, likewise, felt Roosevelt was intruding on their turf. They've been in bed together ever since.

Like Trump, these TV/Mega-church evangelists are grifters. That may explain why they're still allowed to so shamelessly fleece a gullible following out of millions of dollars with total impunity.

Bacevich illustrates how they went from being TV hucksters to insinuate their fundamentalism in the US military. That's very scary and yet rarely mentioned.