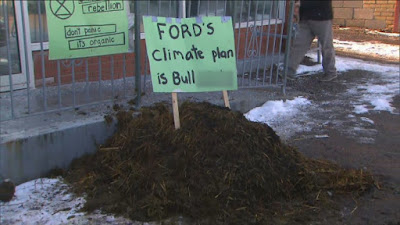 An early Christmas present for Ontario premier, Doug Ford. Some persons, thought to be environmental activists, decided to give the premier something that he already has in ample abundance - a load of manure.


Extinction Rebellion said in a press release the manure was a response to Ontario’s Auditor General “effectively declaring the Conservative provincial government climate action promise is a load of crap.”

The deposit was deposited outside the Depositor-in-Chief's riding office.
Posted by The Mound of Sound at 7:46 PM

Dougie and friends are full of shit as the photo suggests.
That said , with exceptions , politicians are subject to those that that made their appointment possible, be it big business or other special interests.
The higher up the political chain we go the more the outside influence.
This does not bear well for those wishing true democracy but then we have to think about the majority of voters that put their X next to the candidate that offers free beer or fewer taxes with more benefits.

A bit early but .
A merry Christmas to all and thanks for the insightful posts.

thank you for the laugh! Happy Hanukkah and Merry Christmas.

.. I probably understand federal politics better than my homebrew provincial aspects & archaic processes or those of BC or Alberta. It was Harper who introduced me to the reality that legislation aint worth spit or the paper its printed on when we elect a majority government. And here cometh Doug Ford ! And lo, there is Jason Kenney el presidonkey of Alberta & ruler of Albertans & the Bitumen Sands Region.. where 'all that wealth in the ground' as Trudeau quaintly put it is found. 96% of Canada's vast petroleum resources slumber there,

A kindly Twitter contact appraised me of the recent George Monbiot article re 'Political Rewilding' - I'm certain you and your compadres have tracked it down and read it. I found it a remarkably accessible explanation and pathway towards useful governance. It invigorated my thinking.. which as you know, suggests our major political Parties are now the ingredients for disaster. They have parsed & dissected all our ancient monarchial handmedown rituals and arcane processes.. and now simply 'take us for fools' (H/T Thomas Mulcair) They have mastered the art of the Omnibus Bill, the dark arts of fundraising to accomplish their neediness and greediness, which we really are not to impertinently question whatsover. Rumour has it that Pierre Poilievre, may be the new middle aged multimillionaire shining star of one needy mugaParty of warmed over Reformers. The Lieberals we really don't know. Its as if they cannot 'hey presto' deliver a pipeline then they must be defeated so a new government can redo the laws of the land over 4-8 years. The so called governance trail goes cold there.. aside from the surprise 4 years Ms Notely got in Alberta.

All this aside.. thanks for your unique, precious and rock solid contributions to Canadians who visit your indie blog.. way out there on the big island ! As mentioned to that sage, Owen at Northern Reflections.. we have seafood on our mind this Christmas. Baked Wild BC Salmon the headliner on Christmas Day with all the fixins and a 'big' Washington State merlot that tastes just like a huge dark Oregon Zinfandel.. yum! Today I make a big dent in a box of 33 cultured PEI Malpeque oysters (13 $), several hoppy craft IPA beers will be sampled & demolished. My daughter in law & son will soon have 10 lbs of the Boss's Jambalaya with some built in attitude & amplitude (heat) and hear an old fave album I found on vinyl to gift them.. Gato Barbieri - Caliente .. smokin South American saxaphone.. hot hot hot ! Sexy, sassy.. astonishing album ! your Christmas is exceptional.. and perhaps the sleigh will drop off several pounds of smoked Black Alaskan Cod .. ! SLAINTE !

Merry Christmas Mound.
And thanks again for providing this playground.

Merry Christmas and a Happy New Year. Perhaps in the New Year we Canadians might send J. Trudeau to spend some time with Moon, Jae-inn and learn what a Liberal really means. Anyong, S. Korea