What Happens When You Unleash a Pop Culture Columnist on a NATO Summit? 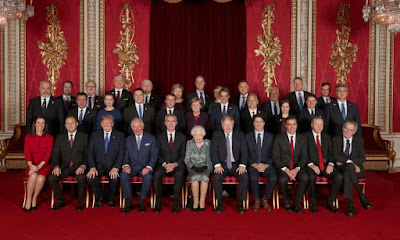 I'm not sure but, whatever it is, it's refreshing. Hanna Jane Parkinson brings her pop culture perspective to the sometimes tumultuous NATO summit.

The last time a group of underachievers with an increasingly shoddy commitment to defence stayed at a “luxury resort” in Watford, it was the England football team. On Tuesday, the leaders of the Nato nations arrived to celebrate the alliance’s 70th birthday. Seventy, coincidentally, is about the average age of the leaders.

Conversation at the mini-summit included how to mess up the Syria situation further, while conversation later at Buckingham Palace, behind Trump’s back, was about how awful he is. Now, I’m no fan of Trump, but watching Justin Trudeau instigating this gossip session leaves you with the impression he is definitely the guy who screengrabs your comments in the WhatsApp group and shadily shares them with others.

It's a fun take on an otherwise dreary and stodgy event, even if Justin can't help stepping in the mud puddles. Enjoy.

Siting the pot for what reason?

What reason? Beats me.

Some gadflies never learn to stay away from the punchbowl when the cameras and tapes are rolling. And sometimes they don't even need the punch. They just get carried away with and by and all by themselves. I guess it's hard to be anything but giddy in such distinguished company when vacuity is your default state of mind. Post-nationalism, anyone? Wait a minute. These aren't the right guys. Where oh where did we put those refugees?

How nice of Jr to provide a convenient trigger for the latest distraction.

I enjoyed watching the world leaders gossip about the evil bully. Every place I worked at, we all needed to vent about asshats we are forced to deal with.
This seems so human and real, and really the glee that many people will have that Trump was once again humiliated---is worth our own leader looking like a pompous idiot.

Hey! What a great "man spread" in that top picture!... and you ought to be down right happy that Justin Trudeau has put Canada back on the Map....Gee-Whizz!!!

I wonder what would be said about a group of women sitting like that?