Could Justin Trudeau Bring Stephen Harper Back to Life? 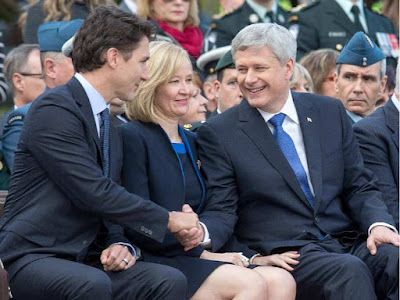 Michael Harris sees a Stephen Harper comeback in the cards.


...sources within the Conservative party have been telling me of an internal faction eager to see Andrew Scheer gone in order to make way for the return of Stephen Harper as party leader.

...So who might be next up? As the Christmas ditty goes, it’s beginning to look a lot like Harper, everywhere you go.

As one Senator put it to me on background, “While the avalanche of criticism mounts, no one is talking up a successor. Who is waiting in the wings, ready to go, straight out of the box? Only one person is ready. Stephen Harper, come on down!”

...Despite their various talents, none of these potential candidates [Lisa Raitt, Michael Chong, Peter MacKay, Erin O'Toole and Rona Ambrose] has anything like the network that Harper maintains to this day within the CPC. That includes a coveted spot on the Conservative Party Fund. Perhaps that’s why Harper himself had this to say to an audience at Stanford University’s Graduate School of Business in February 2018, less than a year after Scheer became leader:
“I think I probably could still easily be leader of my party if I wanted to. I mean, I’m the de facto founder of my party.”

Hubris or honesty? Both actually.

A guy named MacKay had a little to do with creating the CPC back in 2003. But Harper’s vaunted opinion of his leadership prospects may be accurate. It gained major traction from a November 2019 Abacus Data poll that asked 3,000 respondents over the age of 18 this question: Andrew Scheer or Who?

“Our test of potential alternatives to Mr. Scheer finds none, except for Mr. Harper, are preferred over Mr. Scheer among those who voted Conservative in the last election,” wrote David Coletto, one of Abacus’s founding partners.

The very idea of another term in power for Sideshow Steve is pretty dreary, especially with the holiday season approaching. It's more than dispiriting. It's infuriating.

It's not that hard to remember back four years when Justin Trudeau came from third place to a majority win, largely on the strength of his solemn promise to implement electoral reform. He assured us that would save and protect us from another thug like Stephen Harper. No more First-Past-the-Post shenanigans to defeat the popular will of Canadians, no siree.  Those days were over.

Only Justin had other plans. Once in power with an admittedly false majority he figured he was set to repeat his victory in 2019 so long as he kept FPTP alive and kicking. So he conjured up a feeble excuse that convinced no one except his most ardent fanboys and reneged on his solemn promise. Then he proceeded to break other promises and sully himself in scandals to the point where he almost got his ass handed to him in 2019 by a third-rater whose only claim to fame was a summer help counter-clerk job at an insurance agency.

If Michael Harris is right and I hope to hell he's wrong, it will be Justin Trudeau who paved the way for a Stephen Harper comeback.  Who knows? When the part-time insurance clerk managed to garner more votes than Trudeau's Liberals, do you think Harper would fare any worse?

Honestly it would serve the cowards who voted Justin Trudeau in 2019, but really wanted someone else right if Harper came back and won. They rewarded Justin Scummy treachery, some kind of punishment is deserved.

While we're at it, let's bring back Mike Duffy too. Come to think of it, after what happened to the Duffster and if Harper should return, he might have some trouble finding a new burnout to conduct his next set of phony in-depth interviews.

For millions of Canadians, the real ballot box issue was that one candidate wants to jail you for smoking a joint, while the other says not only should you not go to jail, you shouldn't have to deal with criminals to buy that joint.

Stephen Harper had asthma as a teen in Toronto so he never tried smoking a joint. Otherwise he would have understood, and not been on the wrong side of this.

Millions of Canadians will vote for Trudeau as long as he wants to run, since he freed them from this fear of being caught up in some drug charge, possibly with jail time. These are otherwise completely law abiding citizens who are now completely law abiding. They still have to be discreet since entering the US can still be a problem.

You can minimize that, but quite honestly, I can't think of anything Harper did that more directly made my life better. Nor many past PM's.

The cross bearing Conservatives are fighting their moderate! comrades.
It will be more than forty days and forty nights before they realise they have to moderate to become electable.
Harper won't help.

The recent posturing and spin of Andrew Scheers fall from 'Conservative' heaven tweaked my antenna. All the talk, punditry, MainMedia noyz was like a laundry wash cycle. But it all pointed to speculation & vagaries, smokescreening regarding 'blame game. But all it tells me is that the 'Conservative' Party fully believes 'voters vote the Party' ergo they vote the leader. What else can be surmised ? Give our heads a shake if that's true !

Next.. if that is true, we can isolate on that political party.. and decide if its actually just a vast, complex, diseased cult. Sure it will have factions. Any huge group will have factions or certain interests, even conflicting beliefs. Ah now.. ! The 'big tent' .. what is that all about ? 'What goes on in Vegas stays in Vegas' ?? Same under the big tent ?

Out of curiosity, does anyone know the total membership numbers of the CPC ? Does anyone have an inkling how many, or who, does not hold a membership, but instead have a secret handshake or pin they wear.. or are just 'rainmakers' or black ops skulkers and manipulators ? Who are 'made men or women' .. Hell, a lot of them are PR managers appearing on TV panels nightly, or appointed Senators like Frum or Batters who Canadian taxpayers pay, expense and pension.. to raise party funds and tweet partisan garbage at us

Forget people who simply vote for a moment.. who are engineering the grand plan ? How does a Hamish Marshall get annointed, an Alykan Velshi ? A Matt Wolf float from Ottawa to Kenney's War Room, an Alberta Firewall Letter signer like Ken Boessenkool end up servicing Christie Clark in the BC 'Liberals' ? A Stephen Lecce or Jenni Byrne end up in Doug Ford's retinue via Stephen Harper ? And who are all these evangelical pro-lifers taking over CPC riding candidate campaigns by flooding membership.. all to ensure candidates are pro-life ?

They call this 'Democracy' ?? This looks more like a vast diseased christo anti-vaxer organization.. or an evangel nationalist brotherhood in support of the Rapture.. and away off there in his exalted mind is Stephen Harper.. the new and shining eminence grise a la a vicious uodate of Preston Manning.. with his holy Harper coterie of selected cabin boys & spokeswanks

As much as I abhor FPTP and believe Jr is a greenwashing climate criminal, I think this statement is pure exaggeration:

" largely on the strength of his solemn promise to implement electoral reform."

Harper is a piece of dried up dog shit. Most Canadians realise that the Reform,Crap,CPC are extreme right wing bigots to be avoided at all costs.
Trudeau (the hand puppet) is really no better that Sheer but much less dangerous.

I agree wholeheartedly with Anonymous and NorthernPoV regarding the exaggeration of electoral reform being the number one issue for voters in the election. It is also annoying to hear from so many corners, glib assertions of Trudeau's incompetence, ineffectiveness, and lack of gravitas. I have voted NDP for many years but acknowledge that with the Conservatives in power we would not have legalized marijuana, a carbon tax, and physician assisted dying. That's a lot of heavy lifting for a lightweight incompetent. It's also bemusing to see a large part of the population loathing him for being in the pocket of the petro industry at the same time his party is routed in the oil patch for not supporting the industry.

I have been saying this since Harper was ousted. Anyone with a brain knows this man does not give up! Anyong