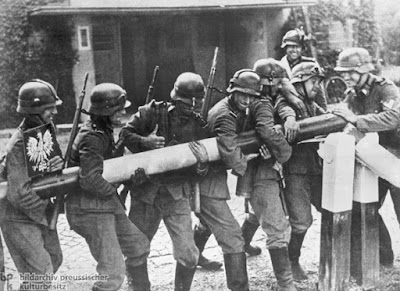 Russia and Poland are exchanging insults over - World War II.

Russia likes to see itself as a victim of the war. Poland, however, has been depicting what was then the Soviet Union as an unindicted co-conspirator in triggering the war.

At the heart of the spat is the 1939 Molotov-Ribbentrop "non-aggression" pact.


The agreement is rarely discussed in Russia, where the Soviet Union's role in ending the Second World War is a source of enormous patriotic pride.

The pact was a written mutual guarantee of peace, as well as a commitment that neither would ally itself to an enemy party. The countries' two foreign ministers, after whom the pact is named, also agreed to carve up eastern Europe between one another.

Confident he had nothing to fear from Uncle Joe Stalin, Hitler sent his armies to invade Poland. Two weeks later the Soviets entered to claim their spoils, the eastern half of Poland.

A few months ago the European Union waded into the controversy.

The governments of Estonia, Latvia, Lithuania, Poland and Romania had released a statement in August saying the pact "doomed half of Europe to decades of misery."

This didn't sit well with Russia's current strongman, Vlad Putin, who said he's sitting on an archive full of Europe's dirty laundry that he's ready to air in retaliation.

Poland wasn't the only prize offered to Russia. Estonia, Latvia, Lithuania and other territories were also ceded to Moscow under a 'secret protocol.'

Then Hitler gave Stalin the treatment by invading the Rodina.

In the past, Putin had condemned the accord but also labeled it a "necessary evil" on the part of the Soviet Union, the only viable way to avoid imminent conflict with Germany. But since the European Parliament's September resolution identifying the pact as a key trigger for the conflict, he has toughened his tone considerably.

Putin told soldiers that Allied policies of appeasement before the war broke out, for instance tolerating Germany's annexation of Czechoslovakia in 1938, was also to blame for the conflict and for the communist Soviet Union's decision to seek a deal with fascist Germany.

But he reserved particular criticism for Poland, alleging in particular that Poland's ambassador to Germany at the time was a Nazi sympathizer.

"Essentially they colluded with Hitler. This is clear from documents, archival documents," Putin said at the defense ministry.

Now, to stir things up just a little more, the US ambassador to Poland has jumped into the fray. Vlad ain't gonna be happy.


Germany and the Soviet Union were both responsible for the outbreak of World War II, said the United States Ambassador to Poland, Georgette Mosbacher.

Her statements, made in a tweet on Monday, were responding to Russian President Vladimir Putin's claim that Poland was responsible for the start of the war.

"Dear President Putin, Hitler and Stalin colluded to start WWII. That is a fact. Poland was a victim of this horrible conflict," Mosbacher wrote.

Mosbacher was appointed ambassador by Donald Trump.  A former FOX News contributor and entrepreneur, Mosbacher has been known for offending anyone.


Mosbacher courted controversy when she suggested that Poland was responsible for the re-emergence of anti-Semitism across the continent of Europe because of a law which criminalizes blaming Poland for the actions of Nazi Germany on its soil during the Holocaust.[41]

Prior to being appointed, Polish President Andrzej Duda stated that if Mosbacher were to be appointed as the new U.S. ambassador to Poland, she will be accepted, despite having made “unnecessary and mistaken” comments about the country.

Are the Russians going to deny that the Soviet Union was responsible for the Katyn Massacre all over again? Why not? Modern propaganda consumption habits should make it much easier this time around. Trump owes them a few favours. Let's see if he decides to help them out.

I was thinking of that massacre as I wrote this, JB. Russia has again descended into a casual familiarity with truth akin to what the Soviets experienced with Stalin and most of his successors. I suppose that's to be expected when a KGB colonel is allowed to rule the country. It's been claimed that Putin may be the richest man on the planet which, if true, suggests he's riding a tiger he can't afford to step off.

Is this some of Rachel Maddow's nonsense?

Are the Russians going to deny that the Soviet Union was responsible for the Katyn Massacre all over again.....

At times we all succumb to gossip that meets our ideals!

I think Bill Browder might have been the guy who first submitted the "Putin richest man" characterization. He said it was a possibility but he believes it - no hard data, but others have also made the claim. I'm not sure about Rachel Maddow. Sergei Pugachev ("Putin’s banker”, now exiled from Russia) puts it this way: “Everything that belongs to the territory of the Russian Federation Putin considers to be his. ... Any attempt to calculate it won’t succeed. He’s the richest person in the world until he leaves power.” Whether he's been able to stash anything substantial that he'll be able access after should that occur (and how much that could be if he has) is another question. Gossip, or speculation akin to it, I'll concede.


Is the US or the UK currently experiencing any discord with Poland over alleged atrocities that may have taken place during WWII?

Let's blame all our dysfunctional democracies on .... Russia!

Comrade NPoV, that's a sizeable burr you've got under your saddle.

A number of years ago a documentary was done on Putin. It did cover his "take" of all the money the oligarchs make. It also discussed the house they built for him, which was alleged to have cost $250M. Now for a guy who made his living as a KGB agent to have acquired a lot of wealth since coming to office, he didn't get it from his day job. The conclusion of the documentary was that Putin can't really leave the position, he has done too much damage and once out of office, he'd be fair game for those he stole from.

The documentary wasn't MADE by Rachel either. I think it was either CBC or European. It delved into how state corporations were moved into the hands of the oligarchs, how Putin facilitated that, etc.

Now as to Russian and Poland quarrelling about who started WW II, it was started, it ended, let the boys put their peckers back in their pants and perhaps do something constructive for their country