O'Connor To Walk the Plank? 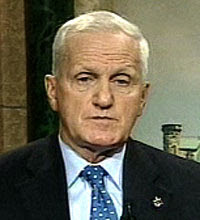 Defence Minister Gordon O'Connor has been a complete dud. He contradicts himself, he contradicts his military staff, he often seems confused or ill-informed. He's a dud and for Stephen Harper, Gord is becoming a real liability.
“It strikes me as unusual to have the minister and the chief of the defence staff saying different things,” said Tom Flanagan, a professor at the University of Calgary and a close Harper friend. “All I can say is that it looks odd. It makes you wonder what's going on.”
O'Connor isn't getting any help from his Chief of Defence Staff, Hillier. A number of times O'Connor has stated some policy or view only to have it undermined and contradicted by Hillier.
Posted by The Mound of Sound at 8:57 AM

Cabinet and MP's are only allowed to state PM approved statements - so is the problem really Harper?
O'Connor being made to use the misleading political spin?
One wonders.

I think O'Connor is the classic, 5-watt bulb. He's not sharp enough to stay on message. He may,actually, be a tad addled.

You're all confused.
I thought it was Hillier that was a Conservative puppet...no?

Mr. O'Connor is VERY well liked and respected by Conservatives. He said along time ago that he is not running again, and has stood up to Lib/Dip/Bloc/MSM/anti-Afghan/war activists/bloggers relentless attacks like a real soldier.

Mr. O'Connor has survived far deadlier attacks from his enemies.

Salute to Mr. O'Connor and Mr. Hillier, men who have literally put their lives on the line to serve Canada, and all Canadians.

You can say that almost everyone who has ever worn a military uniform has "put their lives on the line to serve Canada." I guess that includes me and my Dad and a whole bunch of other people I know. Hillier a conservative puppet? Where did you get that idea? He's the one pulling the strings and the pols are the dancing puppets. By the way, Wilson, I didn't realize that making well-deserved criticism of O'Connor was a "deadly attack." Maybe we should all back off in that case, eh?

Hey Wilson - I guess O'Connor is so well liked and respected by Conservatives that they're giving him the boot. They like him and respect him so much - he's being given an office with a chair that flushes.