Time to Fight Back 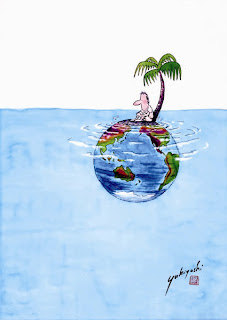 To the nutjobs, the Intergovernmental Panel on Climate Change, or IPCC, is dedicated to spreading fear and panic on the strength of unsubstantiated claims that man is changing the world's climate.
To the nutjobs.
Floods in China, Texas and Britain - vanishing polar ice - receding glaciers - drought and desertification - what once were considered rare anomalies are today commonplace. Did you ever notice how the IPCC reports are regularly overtaken by events almost as soon as they're released? Why do you think that is?
Here's the answer. The IPCC doesn't overstate in its forecasts and predictions. It understates. The IPCC reports are consensus based and they reflect the powerful lobbying efforts of countries such as the United States, China and India demanding that they be understated. That's why they've consistently underestimated the severity and timing of climate change events that have followed.
Now we have a Canadian study that proves what has been predicted all along - that global warming and greenhouse gas emissions are altering global rainfall distribution patterns. The lucky ones - us - are going to receive more rainfall overall, even at the price of massive flood events. The unlucky ones - them - are already seeing their homelands turn uninhabitable by drought, groundwater exhaustion and desertification. This is another reality the IPCC did not overstate.
The impacts of global warming are coming on faster and stronger than what we'd been warned to expect. There's no short-term answer for this problem. The answers are painfully long-term, multi-generational. The longer we put off accepting our responsibility for what we've created, the worse it's going to be for those who will inherit this world from us.
The time for putting up with the nutjobs is over.
It's time to fight back. Sure other nations are dragging their heels but that's no excuse not to accept our responsibility.
Posted by The Mound of Sound at 8:23 AM

Fight back how? Invade China? Boycott the US and India? I commented on a blog that yesterday was the 32nd anniversary of Newsweek's "Global Cooling" edition. Go to Newsweek and read it. Thousands of respected scientists with dire warnings of crop destruction and world wide hunger, except, in that report the scientists only had suggestions on how we could make the changes needed to survive. Its hard to take scientists seriously when every 25 years they come up with a doomsday scenario. I've agreed time after time with you about how humans treat the earth and how that needs to change, but yelling the sky is falling everytime there's a drought or excessive rain is counter productive, because as we all know, the Grand Canyon was once a river and it dried up without a human around to blame it on.

How you fight back, Bill, is by calling out the denier community whenever you find them spewing out their crap, such as claiming the IPCC is inflating its reports. I'm fed up with these cretins. Global warming is no longer a theory but, especially in the more vulnerable parts of the planet, a painful reality. The Grand Canyon was once a river. So was the Colorado.

"So was the Colorado"...interesting example of a recent river drying up except it's due to water being diverted for irrigation, etc.

Definitely humans have caused a problem with the Colorado River, it just didn't happen the way you're implying.

About 2 weeks ago you and I had the same arguement, your final comment was one of the best written paragraphs about our bioshpere and the lack of human respect for it, and how, eventually without taking more care we would destroy it. Why waste time on who does or doesnt believe the IPCC report. Your either preaching to the choir or yelling at the crowd, in both cases it doesnt really matter does it. How does calling out the denier crowd change anything? Its hard to win an arguement convincing anyone that humans are responsible for climate change when they can give you a million years worth of non human climate change history. Contributing to climate change...absolutely!! Contributing to the decay of our plantet..absolutely, but where the arguement gets lost and becomes noise is when it gets all Al Gorey and says that we are responsible and we can stop it, thats utter nonsense. The earth will continue to change regardless of who lives on it. It just seems to me that more people would listen and react more positively if they werent hammered over the head with untruths and rhetoric.

No Bill, I know what happened to the Colorado and other rivers. There are some, however, like India's Ganges that are in danger of being turned into seasonal rivers due to the receding Himalayan glaciers. Interesting side note on the Colorado. The Mexicans at one time had a fishery on that river before it stopped flowing into their country.
How are we going to fight China and India? It won't come down to a fight of that sort. We are going to wake up and, when we do, the Chinese may find their products unwelcome unless they change course. Actually they're already getting caught up in their own environmental/global warming catastrophe. Like India, they're going to experience serious consequences long before we do.

A vexing part about climate change is that GHG emissions are only a contributor to the problem. There are other factors that compound the global warming effects - such as overpopulation; deforestation; acidification; air, soil and water pollution; and exhaustion of resources such as groundwater. When we take one, even an important one like greenhouse gases, in isolation of all the others we're not seeing the forest for the trees. For now at least, thank your very lucky stars you live in Canada, Bill.

I think your right Mound. And, its the first time I've heard an enviro-nut call for some sort of economic punishment if China refuses to wake up and realize the damage they are doing. (btw..enviro-nut is a good thing, it usually means someone is more aware of their surroundings.) And I'm going to give you my prediction on how this plays out, and, how the Liberals blew it. More and more Canadians are going to realize how Kyoto was flawed, and how little we actually contribute to GHG global warming, the Conservatives will breathe a sigh of relief, and, institute some sort of half assed pollution and toxin's bill. Just an opinion.

Bill, if you ever get a chance to see how many are influenced by the deniers because it's what they want to hear you could understand the damage this group causes. That's why it's important to stand up to them. It's similar to those in 2003 who stood up to oppose Bush/Cheney on the WMD and Saddam/alQaeda link claims. They too had to confront the "true believers" and they had to keep at it until the majority of Americans came to accept the truth. There are powerful forces at work to sow confusion and doubt and they do it because it works. Day by day, event by event, anyone willing to open his eyes can see what is happening but there are some who choose not to see.

There you go again . . . like when did the UN get anything right . . . . . maybe when they said Cow Flatulence produced more CO2 than all the cars on the planet!!
No one has ever explained how CO2 which makes up only .054% or the atmosphere (and man contributes only 4% of that, 96% created by volcanoes, oceans and decay). What is in the 4% created by man that creates floods, huricanes, melting and 1 degree F of heat in the last 100 years??? Somebody please explain???
Some idiot swam in the Arctic Ocean last week and said the world is melting . . . . sooo nuts!!!
Anyone remember the St. Roche? The RCMP BOAT that sailed the North West Passage 50 or 60 years ago. Was it an ice boat or did it actually float in the water?
Canada creates 2% of the world's CO2 . . . China and India are expanding their CO2 emissions more than that every year . . . what we do is irrelivant!!!
But I have some good news . . . . sun spots are receeding . . . within a few years we will be having "Global Cooling" guess Al will have to make a new movie . . . lol!!

Oldschool, the gloves are off. If you won't make the effort to learn, don't come yapping here. I no longer have any time for your kind.

I lol ( hate that) when I hear Old School picking up stories about some person swimming and then supposedly because of said swim said the world was melting -then takes that crayonish description to support an attempted form of argument. How selective and how childish. It it reminds one of Fox News news scroll for the faint of learning. We certainly can't say that Bush and Exxon don't know their audience.