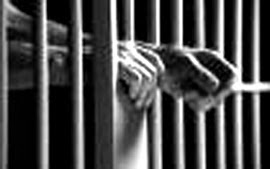 Only in Conservative Canada. Crime continues to fall but that won't stop the Harpies from slinging more Canadians behind bars. I guess it's all the result of Stevie's "get tough on crime before it's gone" policies. From the Canadian Press:

One analyst suggested judges are growing leery of releasing people on bail in the face of a federal government that's pushing a law-and-order agenda.
"I think, overall, we've seen in recent years concern that's been expressed through the Conservative government about judges supposedly being soft on sentencing," said David MacAlister of the Institute for Studies in Criminal Justice Policy at Simon Fraser University.
"Not that I think they ever were, but I think that's bound to have an impact on judges. They're going to be sentencing people for longer periods of time and holding people they might otherwise have released just because of the pressure."
He said crime rates don't explain the rise: "Crime rates have steadily been coming down. There isn't more crime."
While more adults were in jail, the average number of young people aged 12 to 17 in custody on any given day went down, continuing a decline that began with adoption of the Youth Criminal Justice Act in 2003.
MacAlister said it's "inevitable" that the prison population will rise again if the Tory legislation on minimum sentences passes.
"Once you start instituting mandatory sentencing, your incarceration rate is bound to increase," he said.
Craig Jones, executive director of the John Howard Society, said the government's get-tough agenda is going to require more prisons.
"This is our future," he said of the rising incarceration rate. "I sometimes think this agenda is about building more prisons."
Posted by The Mound of Sound at 4:15 PM

So there's a direct correlation between the bad guys being behind bars instead of out vicitmizing society,

Sorry you morons. The crime states pre-date Harpo's chicanery by, well, years and years! You want to do a Cheney and rejig facts to create correlations that don't exist. Typical reich wingers.

The leftist loons say crime is going down?

Violent crime is GOING UP!

Harper doesn't care about the liberal drug addict smoking a $40 piece of crack.

He is worried about the violent crimes which are going up in this country.

Jails deter crimes because the criminals are in jail and therefore cannot commit new crimes.

Pretty simple to me.

But then again , the Liberal party is adopting Layton's hug a thug approach because the left knows they rely on criminals to vote Liberal.

Fred, good to hear from you again. I know you're in law enforcement - at some level. Maybe it's better to leave the crime and punishment issues, however, to those who really know what they're talking about. Glad that you represent yourself as Republican. Actually, Freddy, that's obvious.

I invite you Fred, to visit the latest stats from Stats Can. Violent Crime, including murder, are at a 35 year low., With the exception of a blip after the previous record low in 2003, crime has dropped every year since 1990.

These are the facts and no amount of spinning and conservative nonsense can change them.

We could do nothing, and crime would still go down.

Of course, if the Cons stupid "Drug War" provision pass, I can guarantee crime will go up, and the Hells Angels will be richer for it. Will you be so happy to take credit then?

The Mound of Sound said...
Sorry you morons. The crime states pre-date Harpo's chicanery by, well, years and years! You want to do a Cheney and rejig facts to create correlations that don't exist. Typical reich wingers.


Nice way to insult your readers.

I don't insult people for reading this blog. I do, however, have a limited tolerance for mental malignancy, the sort of nonsense that comes from the far right.