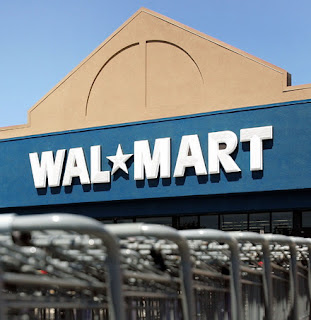 52-year old Deborah Shank won't be having much of a Christmas this year. She's just been Scrooged by her former employer, Wal-Mart.
Shank used to work for the retail giant at its store in Cape Girardieu, Mo., until seven years ago when the car she was driving was broadsided by a tractor-trailer. The accident left Shank with permanent brain damage, unable to walk or even communicate with her family.
Wal-Mart's employee health insurance plan picked up the woman's medical expenses - until - until, that is, her family settled with the trucking company involved for a not-so-whopping $417,000. Wal-Mart, which had paid about $470,000 for Shank's medical care demanded the money, all of it, and a federal court judge agreed. Update - On March 18th, 2008, the United States Supreme Court crushed the Shanks' last hope, dismissing, without reasons, their final appeal. A local paper in their state called the situation "Dickensian."
No question about it. Wal-Mart was legally entitled to scoop Shank's entire settlement, every last dime of it. And so it did.
Of course the Shanks didn't have this problem front and centre on their minds for very long. Shortly after Wal-Mart won its case their son Jeremy was killed in Iraq. The Los Angeles Times summed up Wal-Mart's greed quite succinctly:
Doing what the law allows isn't the same as doing the right thing, however. The company made itself whole at the expense of a helpless former employee who will never be whole again. Instead of having some resources to improve her care, Shank will receive only the basic services afforded her by Medicaid and Social Security. Nor will the trust fund be in a position to reimburse Medicaid (i.e., taxpayers), which stood to collect any unspent money upon Shank's death.
Wal-Mart has spent the last few years working hard to rebut health care reformers, labor unions, anti-globalization groups and other critics who've argued that it puts profits ahead of humanity. While its advertising campaigns try to put a friendlier spin on the company, its behavior toward Shank tells a different story. If Wal-Mart can't restrain itself, perhaps Congress should prevent health plans from draining settlements won by injured workers with more bills to pay.
Do yourself and the rest of us a favour this Christmas. Stop shopping yourself or your neighbour out of a job - just say no to Scrooge, shun Wal-Mart.
Posted by The Mound of Sound at 5:21 PM

I had the misfortune of working for Wal-Mart while I was in high school. They deffinately have a habit of eating their young.

I never shop at Wal-Mart and never will. The South Koreans got rid of them by not shopping at their stores...see what the power of people can do!!

Just another reason to add to my list. I've shopped once in walmart while on vacation in 89 in Florida. Since then I've been unsullied.

Keep spreading the news these guys are rat bastards.

I could spend hours and hours shopping at the Wal-Mart Supercenter. the prices ans selection there are stupendous.

Walmart is an evil empire with a business strategy based on greed - with no values and a total disregard for humanity. I never shop there and never will.

To allow this tragedy to go as far as it has in mainstream media, Wal-Mart shareholders should be on a seek and destroy mission within Wal-Mart senior management. They could have easily averted the attention, in numerous ways. So instead of doing something strategically creative and coming out looking clean (like they did when Target wouldn't allow the Salvation Army to do collections at Christmas, and Wal-mart did and still does), they have lost untold MILLIONS in revenue and stand to lose much more. How do shareholders feel about Wal-Mart's corporate strategy of streamlining health care costs by infuriating current and potential Wal-Mart customers? I will be shopping at Target stores for the foreseeable future (I'll just visit Wal-Mart's front door at Christmas, to donate to the Salvation Army). Add another $1000 loss to Wal-Mart earnings. Keep pissing off the customer, and you may become the number TWO retailer in the world. After that, it's all downhill...... -Bill J.

Another reason for me to not shop there. How heartless can this company get? I haven't stepped foot in wal-mart for almost 4 years and won't ever shop there again.

Wal-Mart in Douglas GA announced over their speakers that Winn-Dixie was filing bankruptcy, I thought management was going to do the freaking wally-world cheer on the spot. Your on the money when you say they have no morals.

It's remarkable that WalMart has let the world see its true face. This is a company that doesn't need yet another backlash but it sure deserves every misfortune that befalls it on this one.

WALMART TRIED TO BEAT ME OUT OF $500.00 AFTER MAKING A MISTAKE BY OVER CHARGING ME FOR A TV AND WITHIN 10 MINUTES OF MY PURCHASE I WENT BACK IN TO GET MY MONEY BACK AND THEY WANTED TO GIVE ME A WALMART SHOP CARD THAT MEANT I COULD ONLY SPEND THE $500.00 AT WALMART I WENT OFF AND IT TOOK THEM 1 1/2 HOURS AND A FIT FROM ME TO GET MY MONEY BACK IN CASH JUST HOW THEY TOOK IT AND I'M A SINGLE MOTHER OF 3 BUT THIS IS BY FAR THE WORST HOW SICK CAN WALMART BE WOW THEY SHOULD GO TO JAIL OR BROKE I WILL NEVER SHOP THERE AGAIN NEITHER WILL ANYONE I KNOW NOW LET THE POOR WOMAN KEEP HER MONEY IF IT WAS A RELATIVE OF WALMART CO. HOW WOULD THEY REACT THEN HUH? SICK BASTARDS AND HOW CRIMINAL.I PRAY FOR THEIR DOWNFALL BIG BULLY CORP. PLEASE ALL STOP LETTING BIG BIZ WIN STOP SHOPPING AT WALMART MAKE A STAND PEOPLE IT WILL MAKE A DIFFERENCE!!! SHENAEE MASTERS

ok.
i shop at walmart every day.
haha ive researched this matter and have come to find that you sir are a possible over dramatic and maybe a bull shitter. wal-mart is sometimes a means of survival for my family. we get most of our grocerys there. you have to do what you have to do. get the fuck over it. ive also realised that youve only told one side to this story. you left out alot of shit. if any of you reading are interested you can look up the facts yourself. wal-mart is a monster. a monster that you can not defeat. wal-mart in its self is the anticrist. it will bring along the demise of our species as predicted in the bible wich is worshiped by cristians. but dont worry it probibly wont happen for a while. wal-mart still has a ways to go. BUT wal-mart is a friendly monster. as long as you dont piss it off its happy and pays you and supplys you with awsome food for cheap ass prices. Thank you wal-mart. so you see my friend wal-mart is bad. where the fuck does all that food come from? no one knows. you would have to talk to some people who know some people who know some peoples people. the main matter is that wal-mart is something inevidable. you can fight it all you want but it is still going to happen. as i stated earlier get the fuck over it.

evryone who reads this please shop at walm-mart. lets just move along with the program. if anything steal from them. why not there not gonna miss a little something... although it adds up.

Well Albert thanks for that shred of enlightenment. You've researched it, have you? Unfortunately you didn't pass along your revelations. Wal-Mart is a means of survival for your family? That's never a good position to be in, Albert. I hope you find out where all that food comes from. With your research skills that shouldn't be too hard to solve. Good luck to you, Albert. I really mean that.

my family and I have used walmart at least
once a week for the last 20 years. We will not be shopping there again until walmart drops this heartless suit. As I say to my children, if you don't believe me, just watch. We shopped at K-Mart today.

I just watched the 6pm news, and they reported that Walmart has dropped the lawsuit. It took them a while, but I am glad they finally decided to do the "right" thing. Now maybe the Shanks family can have one less worry.

Great to hear that, anon. It says something, though, that Wal-Mart had to be put through such a gauntlet of media attention to get the company to back off. I don't think it bodes well for any other unfortunate who crosses paths with the company. And, precisely because WalMart dragged this out so long and put that family through so much it doesn't deserve anyone's forgiveness much less praise. They were forced to do this and they held out far longer than any decent employer might.

the suit was settled for about $1M.

why does no one want the lawyers to give up their share?

subrogation for the insurer to recover their costs is a standard part of the insurance business.

this is not unusual, just more UFCW walmart hate

Anon, I can hardly comment on what the lawyers ought to have done in this case, or even what they actually did. Be that as it may, you're perfectly right about subrogation and every court in the United States recognized that. However the plight of Debbie Shank troubled people and a lot of those people were the sort who voted with their wallets on what they thought of Wal-Mart. American news outlets from the LA Times to CNN to NBC put the spotlight on Wal-Mart and its treatment of Shank. Now, if Wal-Mart wanted to stand on its principles and demand its strict legal rights, as it did all the way up to the US Supreme Court, that would be its choice. Yes it would have (and probably has) suffered public ridicule and a loss of far more in profits but, hey, sometimes standing on principle can become astonishingly expensive. Whatever fate befell Wal-Mart was precisely what it brought upon itself.

I chose several years ago never to set foot in that place again and that's my choice. Maybe I forfeit some of the grand bargains but I think my community is better off when I shop locally and that's worth a few extra dollars here and there.