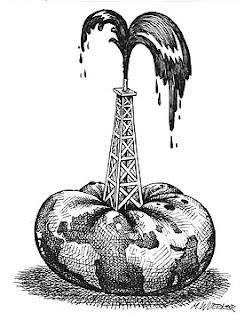 Hey all you SUV jockeys out there! We may have just reached Peak Oil, the point at which global oil production begins its decline.
The Economist reports that Big Oil profits dropped in the third quarter of 2007 despite the world oil price steadily nearing $100 a barrel. Exxon Mobil was down 10% but they were lucky. Overall, earnings fell an average of 15%.
So how do revenues take such a hit while prices soar? Easy, a shortage of labour and equipment drove production costs up almost twice as fast as price increases but the real key - declines in production.
"According to Citigroup, the average decline in overall output was 3.3%. If the relatively steady supply of natural gas is stripped out, the numbers look even worse: oil production fell by 9% on average. No matter how high the price goes, the oil majors cannot make a profit from oil they do not produce."
The International Energy Agency forecasts that we'll see production shortfalls of 12.5-million barrels a day by 2015.
And here's an ominous development. Samsung Heavy Industries has just launched the world's first ice-breaking oil tanker. The ship was ordered in 2005 by Sovcomflot, a shipping company owned by the Russian government. I wonder why on earth they would want an icebreaker/oil tanker? Oh, wait a minute, I get it.
Posted by The Mound of Sound at 10:13 AM

That seems a shame, sort of. The environment is a big issue for me, a top priority as a voter, so I love the idea of seeing the end of exhaust-choked streets and highways. Does seem frustrating to contemplate the end of oil and see how much potential heating has been wasted on driving primitive cars around.