Do the Poor Even Matter Any More? 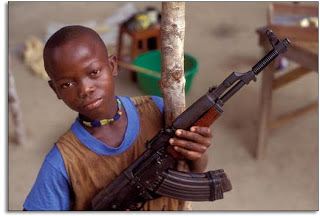 The reports are beginning to roll in daily - food shortages here, food insecurity there, mass starvation risk somewhere else. A lot of the world is in a lot of trouble but, as my drinking friends would say, "who's counting?"

I think this is another example of what Jared Diamond calls "landscape amnesia." That's the phenomenon where we accept today's circumstances as normal by forgetting what normal really meant in the past. Once you forget, it saps your impetus to remedy the adverse change. There's a lowering of expectations without any recognition that this is a regressive thing that can just keep on taking us further down. We learn to settle and, in that process, we steadily settle in.

So, what about these food shortages then? We in the industrialized world have certainly played a role in the misery that's besetting these troubled nations. We've done it through AGW climate change. We've done it by diverting grain into alternative fuels, driving up world food prices. We've done it by really destructive farm subsidy systems.

What are we going to do for these people? Very little, borderline nothing.

Looked through a window of just a few years, today's extreme weather events can appear normal. Floods and droughts from England to Africa to Asia to the southern USA have become norms but those most seriously impacted by them know there's nothing normal in their suffering.

Flood and drought cycles impact freshwater systems. Too much precipitation when it's not needed, causing loss, disease and suffering. Too little when it is needed, causing crop failure and other problems. That, in turn, increases reliance on groundwater resources which is a dangerous dependency, a short-term answer at best.

Now the International Monetary Fund is mulling over short-term emergency aid to countries hardest hit by fuel and food price increases. In a world where wheat prices have jumped 83% in the past year, short-term aid of any sort is a sop, a bandaid solution. More indebtedness for Africa. That makes a lot of sense, doesn't it?

As we drift back into the arms of Morpheus and lose sight of these people, those who survive our indifference aren't losing sight of us. What is more easy to manipulate than a person caught in life-threatening poverty? We're talking here about the "nothing to lose" crowd. It's a rapidly growing club.

So what? Ask our soldiers in Afghanistan. They know the powerful role poverty plays in Taliban recruiting. The United Nations Office for Humanitarian Affairs has a report today on the problem:

Abdul Malik, aged 17, joined Taliban insurgents in the south after two Taliban supporters gave him a mobile phone. A short while later his dead body was brought to his family.

"He was killed in a military operation near Musa Qala District [Helmand Province]," Malik's older brother told IRIN in Lashkargah, the provincial capital of Helmand Province.

"In our district many young guys join Taliban ranks for pocket money, a mobile phone or other financial incentives," said Safiullah, a resident of Sangeen District in Helmand.

"Where the government is failing to provide basic services, often the Taliban are filling the gap with more radical alternatives. This means that sought-after trust from the Afghan people is going to the radical militants rather than the elected government," said the report Afghanistan – Decision Point 2008.

"Research undertaken by The Senlis Council since 2005 shows conclusively that aid destined for the south is not reaching the people," the report said."

These problems aren't going away and they can't be bombed away, that only makes them worse. Our policies aren't working - for anyone, anywhere - and we can't begin to develop practical alternatives until we stop our self-serving amnesia and learn again to distinguish normal from abnormal. Let's do that, if only for ourselves.
Posted by The Mound of Sound at 5:12 AM