Here's Something Karzai Can Tackle - The Sale of Afghan Kids 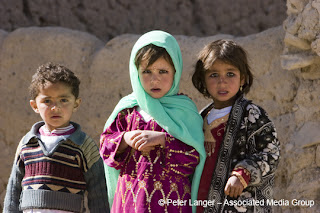 He has been able to safeguard his own job and install his friends in high places. He has managed to thwart the UN's efforts to appoint a super-envoy to organize reconstruction and aid efforts lest that somehow diminish Karzai's own standing.

But surely he has time to protect his country's children. The UN is warning of an increasing problem of parents selling children. I'm sure it's just a coincidence but the kids being sold are all girls. Hmm, wonder why that could be.

In three recent cases, the parents all pleaded poverty, claiming they sold their daughters because they couldn't afford to feed them. In fairness, famine is a widespread problem in Afghanistan, particularly this winter. The going rate seems to range anywhere from $20 up to $240 per girl.

It seems Karzai & Company just haven't had time to pass laws prohibiting the sale and trafficking in Afghan kids or even child abuse. The good news is that they've assured the UN they're working on it.
Posted by The Mound of Sound at 6:21 AM

Those kids are cute. Sad story. I hope they can do something about it.

Hi Raphe. Sad indeed but it's a problem that's not limited to Afghanistan. I found a report today out of Nepal where girls around the age of nine are being sold for $40 to work as slave domestics in Khatmandu.
What can we do save, perhaps, to make heads of state in countries which tolerate this sort of thing criminally liable? I can't imagine how this can be stopped by at the transactional level. That has to be done by each nation's government.

However if you make the head of state accountable for it, you'll be placing consequences on the head of the person responsible for securing his country's children.

I make no secret of my contempt for Hamid Karzai. I would love to see him called to answer for the maltreatment of women and children in his free, democratic Afghanistan. We could start with him and then work our way through that nest of vipers they call a parliament.

Some freedom, Karzai, Bush and Harper are bringing to Afghanistan. Now they are free to sell their little girls. Is that what Bush and Harper mean by freedom for women and more opportunities for children - in this case girls?

Whooee! It's sickening that Canada alone has spent over $3 Billion in Afghanistan and we can't even ensure a standard of living high enough to prevent desperate parents from selling their own children.

Even a small portion of the $1.3 million we spend each and every day on our misdirected mission could be used to alleviate this extreme poverty. This is unlikely under the new command of Lessard. He's all for a more aggressive mission. We've been on the offensive ever since we got to Kandahar.

We haven't gained any territory and we've lost track of all but 18-20 of the Taliban fighters we've captured. It's one step forward and one step back. Meanwhile, we're losing lives and Afghanis are becoming more and more desperate.

Bribes seem to work well in Afghanistan. There is a strong tradition of bribery. We should bribe the officials to be honest enough not to take bribes from anyone else. We should bribe the Taliban recruits not to join the insurgency simply as a way to earn $12-$14 a day and feed their families. BTW, the Afghan National Army only pays $4 a day. There's a no-brainer aching for an "inspired" solution. Pay 'em more to be on the good guys' side.

Canada's next big role is to be trainers for the ANA. We should start by making sure our trainees are getting a competitive wage and making sure they know it's us getting them that wage. We should pay big bribes to those who rat out Taliban infiltrators, too.

What else can you expect when you have a country based upon tribal concepts straight out of the 7 century. Cheers

Maybe you're onto something JB. Forget foreign aid, go straight to bribery for everyone! It reminds me of something I read some time ago about the astonishing amount the Iraq war has cost the US when worked out on a per dead terrorist basis.