The Happy Face of Afghanistan 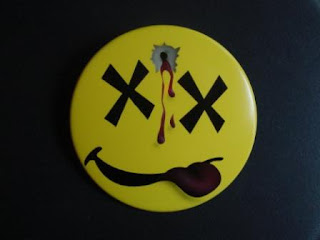 According to US Director of National Intelligence, Hamid Karzai controls about 30% of Afghanistan, the Taliban another 10% and the rest is under the control of warlords. These questionable number were what Mitch McConnell produced when he appeared before the Senate armed services committee yesterday.

McConnell, of course, happily carries water for the Bush White House. That's why those numbers, grim as they may sound, are unquestionably inflated. What does McConnell mean by "controlling" territory? A lot of southern Afghanistan isn't "controlled" at all but is in a disputed state of insurgency. He obviously lumps that in to Karzai's 30%. As for the Taliban then controlling, undisputed, 10% of the country, that's a far cry from the estimates of knowledgeable independents such as Sarah Chayes.

He obviously maintains that Karzai "controls" the cities, Kandahar and Kabul for example. That's becoming increasingly unclear. As Chayes notes, the drug barons openly build mansions in Kabul. And then there's the warlords.

I wrote a couple of weeks ago about a showdown in Kabul between the Afghan police and infamous warlord/thug Dostum. A disaffected Dostum aide had split from his master. Dostum and about 50-60 militiamen stormed the aide's house, killed two of his bodyguards and kidnapped the guy. The Afghan police managed to rescue the badly injured aide and then surrounded Dostum's compound, a hundred of them. Dostum went to the rooftop and hurled taunts and insults at them, daring them to attack. The police simply went away. Now is that how Karzai "controls" his capital?

When Dostum is behind bars for murder and kidnapping, when Karzai arrests the drug barons who sport their wealth freely in Kabul, then you can tell me that Karzai controls the city. Reigning as mayor at the suffrance of warlords and criminals isn't controlling anything.
Posted by The Mound of Sound at 8:08 AM