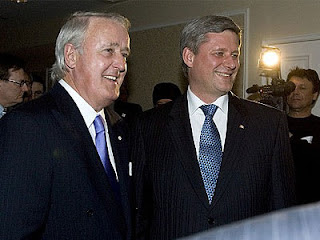 Brian Mulroney has sent his stooges to Ottawa to tell the Commons ethics committee that he'd rather not face any more questions into his shady dealings with Karheinz Schreiber. That's entirely understandable from his perspective. He's spun so many tales that he's cornered and, for BMPM, it can only get worse.

The committee could subpoena Mulroney to attend and even have him brought before them forcibly if he resists. Now wouldn't that be a sight. But it seems the committee doesn't have the appetite for subpoenaing a former prime minister, even one of Mulroney's shabby stature.

I think the committee should just put the Mulroney issue on hold - for now. There are several other witnesses who should be called to testify including one Robert Hladun, Schreiber's former lawyer. It was Hladun who basically confirmed author William Kaplan's hunch that it was Schreiber who leaked the RCMP letter that led to the National Spot article that served as the launching pad for Mulroney's lawsuit against the federal government. I'd like to hear that from his own mouth.

Then there's the phone calls - two of them - Hladun supposedly received; one from Mulroney's lawyer, the other from the lawyer and Mulroney himself. Schreiber's narrative has these calls being placed to Hladun to get a letter or an affidavit from Schreiber claiming that no monies had ever changed hands between Schreiber and Mulroney. This was back when CBC's Fifth Estate revealed it had copies of Schreiber's Swiss bank records and - here's the kicker - before Mulroney's "voluntary disclosure" to Revenue Canada.

If Hladun corroborates Schreiber's account of these calls, it's over for Mulroney, he's suborned perjury, and that goes directly to his credibility when he gave a grossly misleading answer about his dealings with Schreiber in his sworn evidence in the lawsuit itself. Cheque please, Mr. Mulroney - and don't forget the interest.

The committee may not have the spine for a showdown with Brian Mulroney but there's no excuse for not getting Hladun's sworn evidence on these points.
Posted by The Mound of Sound at 3:10 AM