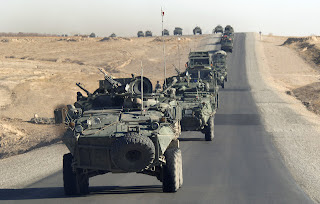 How's this for logic? If we abandon territory, they won't fight us for that territory and therefore we can claim victory because there's less fighting. I guess that means if we packed up all our soldiers and flew them back to Canada we could claim total victory. From the Globe & Mail:

"Secret military statistics show that Taliban attacks have decreased in Kandahar's core districts in the past year, illustrating the success of Canada's new strategy of pulling back its troops into the heart of the province, a top military commander says.

Insurgent ambushes have fallen in four of Kandahar's 17 districts as the latest rotation of troops has focused on protecting the vital zone around the provincial capital, said Lieutenant-General Michel Gauthier, although he did not give specific numbers.

"In relation to where we're focused, I think we are winning," he said.

Geographic focus was a key part of the general's assessment. While saying that security has improved in the districts of Panjwai, Zhari, Spin Boldak and Kandahar city, he repeatedly declined to comment about the provincial situation as a whole.

In places just beyond the Canadians' zone of control, the Taliban have established a parallel court system, enforced curfews, and mounted road checkpoints.

But Gen. Gauthier described his troops in a dilemma similar to that faced by a hospital triage nurse, deciding which patients require the most urgent attention: "You have to prioritize," he said."

Trying to secure a territory the size of Kandahar province with a battle group of but 1,000 soldiers was never more than a preposterous fantasy anyway so it makes sense that the Canadian force would retreat and concentrate on holding the most critical assets, the cities. Is that what "winning" looks like? I guess so, if you can define "victory" as going on the defensive.
Posted by The Mound of Sound at 8:11 AM

It's winter there - isn't it the norm for things to slow down - spring is when bad things happen.