Harper is Genuinely Afraid - Of Us 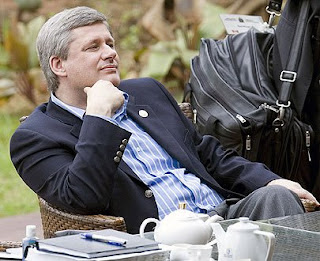 Stephen Harper doesn't like the people of Canada. No, really, he doesn't. Just look at how he mocked the Canadian people - you and me - for the sport of his elite American friends in the ultra-secret, uber-right Council for National Policy when he was honoured with an invitation to address them in Montreal a decade ago.


"It may not be true but it's legendary that if you're like all Americans you know almost nothing except for your own country. Which makes you probably knowledgeable about one more country than most Canadians."

"The NDP is kind of proof that the Devil lives and interferes in the lives of men. Some people point out that there is a small element of clergy in the NDP. Yes, this is true. But these are clergy who, while very committed to the church, believe that it made a historic error in adopting Christian theology."

"Before the Reform Party really became a force in the late '80s, early '90s, the leadership of the Conservative party was running the largest deficits in Canadian history. They were in favour of gay rights, officially - officially in favour of abortion on demand. Officially - what else can I say about them? Officially for the entrenchment of our universal, collectivized health care system and multicultural policies in the constitution of this country."

But, jesting or not, Harper's plainly stated contempt of the Canadian people - you and me - has morphed (as it was bound to) into fear now that he heads a minority government that keeps bashing into the wall of his decidedly un-Canadian dogma.

Fear? Of course. The proof lies in the information lock-down imposed by our Furious Leader on departments in the spotlight such as the Department of National Defence and Environment Canada.

Prime minister Lardo is petrified that someone in those departments might inadvertently blurt out - the truth - and make him look bad. Can't be having that because the truth doesn't match the message. The more you know, the less believable Harpo and his policies become.

It's gotten to the point where even the KanWest gang has had its fill of our Furious Leader's antics. From the National Spot:

Robert Marleau, the information commissioner of Canada, says that contrary to Mr. Harper's election pledge to make transparency a hallmark of his administration, a "fog over information" has crept across the government's activities.

Marleau said complaints to the commissioner's office about lack of access to government information have doubled in the past year.

The Access to Information Act seems like the only way for MPs, interest groups, journalists and others to get government information, Mr. Marleau said in an interview.

Donald Savoie, a New Brunswick academic who has documented the trend toward "governing from the centre," says the Mr. Harper team's penchant for below-the-radar policy making is risky.

"I don't think we'll ever have an open, transparent government as long as we have a minority government," he said. "There is a lack of confidence or insecurity because they don't know where the landmine is going to come from, and when it's going to blow up. So, they try to control it."
Posted by The Mound of Sound at 1:20 PM

Absolutely!! What is democractic about that kind of behavior? Cheers

In considered answer to your thoughtful question, absolutely nothing. Thanks for enquiring.