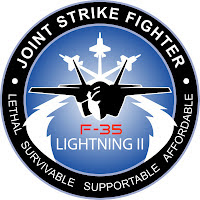 I've decided on using this forum of "updates" because whether the subject state is China, India, Russia, the Koreas, Japan, Brazil or the United States, usually two or more of them are involved in any development. After a while it becomes almost impossible to address these stories on a neat, country by country basis. Ultimately this is one huge arms race that's going on in a bunch of different places simultaneously.

Today it's the visit of US defense secretary Robert Gates to India to seek an elusive alliance aimed at isolating China. To do this the US is dangling the prospect of letting India buy modern US military hardware. The crown jewel in the deal is the long-awaited, Lockheed F-35 Joint Strike Fighter.

The F-35 incorporates a lot of state-of-the art technology, next generation stuff, and it's hard to imagine the US going along with that degree of sensitive technology transfer to a country that continues to maintain its strong ties to Russia and is expanding its ties to China.

Western journalists depict India as technology-starved and in pressing need for our stuff to replace their old "Soviet era" hardware. What a crock! The era of the British Raj is over and we have to stop seeing these people as mahouts and rickshaw drivers.

It was only last October that India inked a deal with Russia to develop, "a fifth-generation stealth fighter aircraft (FGFA), with a deadly mix of super-manoeuvrability and supersonic cruising ability, long-range strike and high-endurance air defence capabilities." (Times of India) China, meanwhile, is already deploying its own, new generation fighter.

China is graduating more than 10-engineers for every one coming out of American universities and they're good, very good. India is opening 27-new universities this year alone, heavily focused on technology and science.

The American gambit smacks of desperation. India knows it's being courted by Washington and it's acting accordingly. Among other things, it's insisting on wholesale technology transfers with new American weapons purchases - something that would have been unthinkable in the past. It's also holding out for its nuclear deal to clear the US Senate.

Trying to play wedge politics in Asia may well backfire on Washington. India and China are both pursuing their economic ascendancy and, in the long run, the best that America can offer will be overshadowed by what they stand to gain from each other. The worst part - for the West - is that they know it.

What is America achieving by this gambit? The biggest effect has to be stoking up anxiety in China, fueling the continuation of this arms race madness.
Posted by The Mound of Sound at 9:10 AM

great and very timely post! No wonder everyone feels a sense of doom coming on.