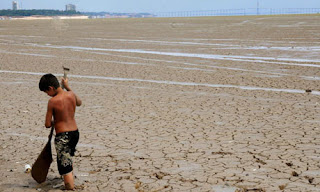 The mighty Amazon basin is being hammered by drought.   The north and western regions of Amazonia are experiencing the worst drought conditions in decades.   The Rio Negro has hit its lowest levels since records began being kept a century ago.

The Amazon and its tributaries are vital highways for the native people of the region.  The waterways are essential for both transport and food.   Now thousands are marooned, their small boats grounded.

According to The Guardian, nearly half of the Amazon's 62 municipalities have declared states of emergency.
Posted by The Mound of Sound at 10:50 AM