A Tale of Two Sphincters 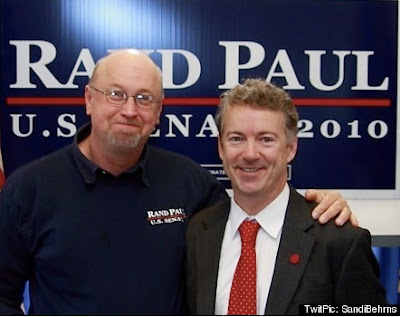 The taller and balder of the two sphincters pictured above is Tim Profitt who made a name for himself recently for stomping on the head of a woman who showed up at a Rue Rand Paul appearance to mock the Tea Party candidate.

At the time it was thought Profitt was simply just another unhinged Rue Rand Paul supporter but now it turns out this tough guy is a member of the Paul campaign.   Profitt is the Rand Paul for Senate Bourbon County coordinator.

Profitt has released a statement acknowledging that he indeed pressed his foot on 23-year old Lauren Valle's head.  Rue Rand Paul later went on, you guessed it, FOX News where he conveniently did not let on that Profitt is a member of his campaign.

But Wait, There's More!   Check out this news clip in which Profitt says Valle owes him an apology.  This is the mentality that is alive in the ranks of the Tea Party.

Profitt’s leg hurts for pressing his foot on woman’s head. How insensitive of the woman? He needs an apology. Rant Paul has proven that he is an asshole and so are his supporters like Profitt.

What Profitt really needs is a strong kick on his butt.

Well Profitt has finally been charged with assault. It sure took the authorities long enough to get around to it. But for the video it would have been completely ignored.