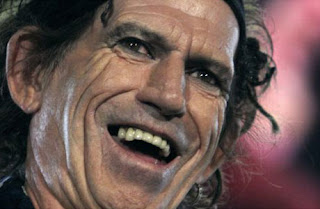 If you're a Stones fan you'll probably be shelling out for Keith Richards' new autobiography, Life.  The 527-page book, to be serialized in The Times, is said to be replete with remarks slamming Mick Jagger, or Sir Mick.  Richards refers to Jagger as "Your Majesty" or "Brenda."  From Reuters:

"Richards, 66, who met Jagger at the age of four, says he has not stepped foot in Jagger's dressing room in 20 years.
"It was the beginning of the Eighties when Mick started to become unbearable," Richards writes in the memoir, "Life," which brought him an advance of 4.8 million pounds ($7.7 million) after a massive bidding war among publishers.

...He added about Jagger: "We've had our beefs but, hey, who doesn't? You try and keep something together for 50 years," adding the band was considering going on tour again.

"I loved a good high. And if you stay up, you get the songs that everyone else misses because they're asleep," Richards said.

During his addict days in the 1960s and 1970s, he spent a decade on the "People Most Likely to Die List."
"
Well, I'm not putting death on the agenda," he told the Times. "I don't want to see my old friend Lucifer just yet."
I guess I know what I'll be getting for Christmas
Posted by The Mound of Sound at 10:59 AM

THIS is the book I'm putting on my Christmas list.

Hey, Jo. It's available on pre-order from Chapters online for 21-bucks. You might want to get your hands on a copy of the DVD or Blu-Ray version of Scorcese's "Shine a Light." I watch it a few times a year when there's nothing on the tube.

KR was always the glue that held that band together. Brenda was far too flighty and self-absorbed to make it last.

I read one review that described Richards as the "blackest white man on the planet." Ha, ha.

The "blackest white man on the planet." That's good.

Keef was always my favourite.