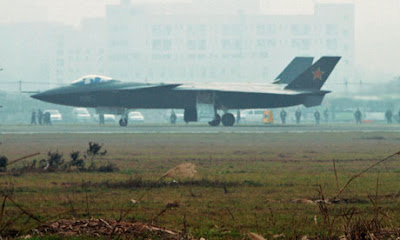 China has just conducted the first test flight of its J-20 stealth fighter.   The flight coincided with the visit of US defense secretary Robert Gates who is in Beijing seeking improved military ties between the two countries.

"  I asked President Hu about it directly, and he said that the test had absolutely nothing to do with my visit and had been a pre-planned test,"   Gates told reporters.

Now that everybody we might ever need the F-35 to attack is busy "stealthing up" what does this mean to the supposed value of the invisibility factor of the joint strike fighter we're on the hook to buy?   Maybe, when it comes to defending Canadian airspace, the advantage will go to the plane that can see the other guy, not the one that tries to hide.   In sticking to the F-35 we're giving up just about every conceivable advantage in performance for the sake of stealth qualities that may turn out to be very short-lived benefits.
Posted by The Mound of Sound at 8:30 AM

Email ThisBlogThis!Share to TwitterShare to FacebookShare to Pinterest
Labels: JSF