Does the Tea Party Harbour Terrorists? 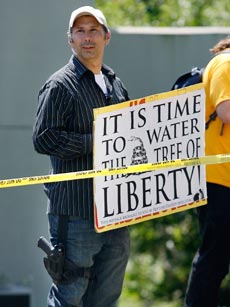 A poll conducted by Daily Kos found that 13 per cent of respondents who identified themselves as Tea Party supporters responded yes when asked whether they thought violence against the current American government was justified.

I don't know but it sure sounds to me like the Tea Party is a seditious, terrorist organization.
Posted by The Mound of Sound at 2:24 PM

I wonder what the next incarnation will be? Didn't they use to call themselves Minute Men?
There's always some Conservative movement about, which draws in the most rancid and fringe elements of the right wing, which eventually discredits the name, and then it moves on.
Birchers like Palin always seem to be around it, too.

Oh my goodness! What? This going on in the best country in the world, the best democracy in the world and the best economy in the world? What?? Not! They lead the world in mind corruption and then put it into practice. How stupid people become with people like Palin aroundl.

I don't know that this is like the rightwing movements of the past. The John Birchers were extremists but they were relatively rational. Today's rightwing mob exhibit signs of being far more powerfully conditioned than their predecessors. I'm beginning to see them as akin to round-eyed North Koreans.

I have some limited experience with "John Birchers". Well, this goes back to about 1965. A high school friend who lived with his "Bircher" grandparents promptly joined up to be a US Army paratrooper right out of high school to go fight commies in Vietnam. You say rational; I say they were "the first ones one the block to have (their) boy come home in a box". What a complete waste...

Yeah Anon, I too remember those days. For their time the Birchers were radical but they probably wouldn't pass muster today. Perhaps more importantly the Birchers were more widely recognized as radical than today's rightwing extremists who have managed to gain much more credibility.