That Explains a Lot. Reagan Had Alzheimers While President. 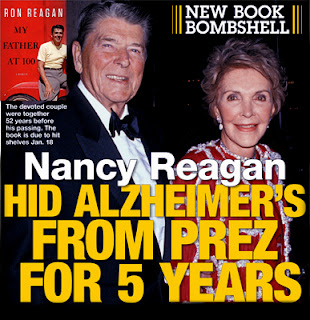 RR's son Ron claims his dad was becoming seriously addled by the third year of his first term as US president.   Ron Jr. makes the claim in his new book, "My Father at 100,"  that commemorates what would have been Reagan's centennial.

...Ron Reagan describes his growing sense of alarm over his father's mental condition, beginning as early as three years into his first term. He recalls the presidential debate with Walter Mondale on 7 October 1984.

"  My heart sank as he floundered his way through his responses, fumbling with his notes, uncharacteristically lost for words. He looked tired and bewildered," Ron Reagan writes.
Posted by The Mound of Sound at 9:53 AM

Well, Duh. Anyone with half a brain who ever watched one of his State of the Union speeches knew his elevator wasn't going to the top floor. It's a shame his "friends" didn't give him the help he needed. Instead he damn near fucked us all.

"Damn near"? We haven't had the full measure of Reagan's Age of Ruin yet. His legacy lives on and America (as well as those dependent on the US) will remain the worse off for it.