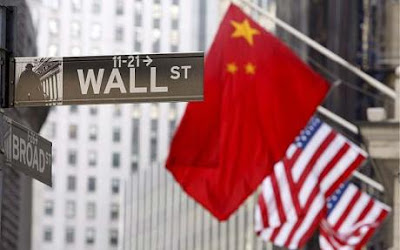 It's always grim when a major client goes through some upheaval.   The tighter your own fortunes are tied to that client, the more severe the repercussions you endure.   That sort of describes the United States and Canada.   Which is why we should brace ourselves and prepare for the upheaval coming south of the border.

Can you even  get your head around the idea that, within a decade or  two, the Yuan could well replace the US greenback as the world's reserve currency?   Oil priced in Yuan, debt written in Yuan?

At an annual conference of leading American economists now underway in Denver, optimism is in short supply.  Reuters reports that the buzz this year is America's decline and China's ascent.

Leading thinkers in the dismal science speaking at an annual convention offered varying visions of U.S. economic decline, in the short, medium and long term. This year, the recovery may bog down as government stimulus measures dry up.

In the long run, the United States must face up to inevitably being overtaken by China as the world's largest economy. And it may have missed a chance to rein in its largest financial institutions, many of whom remain too big to fail and are getting bigger.

...Harvard's Martin Feldstein said he believes the outlook for U.S. economic growth in 2011 is less sanguine than many believe.

First, the boost to growth from government spending will be drying up this year, he said. Renewal of expiring tax cuts is no more than a decision not to raise taxes, and the impact of one-year payroll tax cut is likely modest, he said.
...On the other hand, there is the race with China and the dynamic Asian economies, including India. Most estimates put the size of the Chinese economy on par with the United States by the early 2020s, said Dale Jorgenson, also of Harvard.

...The United States will need to come to terms with the fact that its prevalence in the world is fated to come to an end, Jorgenson said. This will be difficult for many Americans to swallow and the United States should brace for social unrest amid blame over who was responsible for squandering global primacy, he said.

MIT's Simon Johnson put it more bluntly, saying the damage from the financial crisis and its aftermath have dealt U.S. prominence a permanent blow.

"  The age of American predominance is over,"   he told a panel. "  The (Chinese) Yuan will be the world's reserve currency within two decades."
There you have it in a nutshell.   America's collapse into recession was bad but not bad enough for a "bought and paid for" Congress to act decisively and reform America's toxic financial institutions.   To the contrary, congressional Republicans with the full backing of Tea Partiers and a few conservative Democrats are intent on further deregulating the financial sector and entrenching tax cuts their nation simply cannot afford.   These are the political class intent on finishing Reagan's work.

And, rather than salvaging and reforming America's economy, at the end of the day it will come down to finger pointing as each side blames the other for "squandering (America's) global primacy."

As a footnote I'd like to point out that these assessments, like so many political, economic and military evaluations, leave out one critical factor - the fallout from climate change and associated environmental challenges that, within 20-years, will be impacting and likely destabilizing China, India and the United States.

A second footnote.  Deutsche Welle reports  that China isn't alone in wanting to drop the US dollar as the world's reserve currency.  French president Nick Sarkozy, whose country will host this year's G8 and G20 summits also wants a new reserve currency that reflects today's reality:

"  The system put in place in 1945 is for a world that doesn't exist anymore,"   the French president told the nation [in a New Year's Eve address].

He suggested that the current model which uses the US dollar as the primary reserve currency was "  unstable"   and "  makes part of the world dependent on American monetary policy."
Posted by The Mound of Sound at 11:52 AM

We from the west helped China to get where it is today and all based upon greed and not much reality as to what could happen due to that greed. There is much talk in Asia regarding the American currency as well and how much better it would be using the Euro....is that any better?

I imagine the Euro will be more stable than the dollar if it survives the current EU fiscal problems. Unfortunately, as I've noted repeatedly, I don't see the 21st as a century that will feature any great degree of stability anywhere.

China and India are clearly ascendant but what does that mean in a world that already cannot provide renewable resources at anything approaching existing consumption? India is expected to be plagued with freshwater shortages due to over consumption and the decline of glacial feeds while China is one of the areas most vulnerable to 21st century mega drought.

The bag of uncertainty is so great that most studies today rarely venture into more than one or two issues, omitting factors that cannot be reconciled even though they may be determinative of the issues under consideration. That should be disturbing but, oddly, it doesn't seem to be.