The Wivenhoe Dam and Other Invaluable Lessons From the Australian Floods 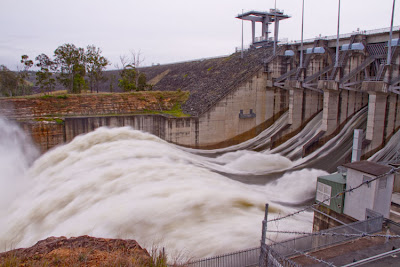 When it comes to environmental challenges, Canada's political leadership is largely asleep at the wheel.   The Canadian public, kept well and truly in the dark by the petro-state government in Ottawa, isn't particularly engaged with environmental problems which seems to encourage Harper, Ignatieff and Layton to lag well behind.  It's incompetent political leadership and, eventually, it carries a heavy price.   If you need an object lesson, take Brisbane.

Australia's third largest city has suffered massive flooding in recent days.  The city centre was inundated.   Several thousand homes were submerged by rising floodwaters.  What makes Brisbane important is not that it was flooded.  It's that the relevant political leadership had timely warnings of what was coming, could have acted early to minimize the impacts but waited until it was too late thereby making everything far worse.

Germaine Greer, writing in The Guardian, explains how it all went so wrong:

...Six months ago the meteorologists thought it was worthwhile to warn people to "  get ready for a wet, late winter and a soaked spring and summer."   So what did the people do? Nothing. They said, "  She'll be right, mate".  She wasn't.

It takes La Niña to bring rain to the inland, in such quantities that it can hardly be managed. Manage it Australians must. The Wivenhoe Dam on the Brisbane river was built to protect the city of Brisbane from another flood like the one of 1974. For years it has been at 10% of capacity, so when it filled this year nobody wanted to let any of the precious water out. It eventually became clear that the dam had filled to 190% of its capacity, and the authorities realised with sinking hearts not only that the floodgates would have to be opened, but that the opening would coincide with a king tide in Moreton Bay. The question nobody has been heard to ask is whether or not the level of water in the dam should have been reduced gradually, beginning weeks ago. The mayor of Brisbane, aware that a disaster was about to occur on his watch, made a hysterical attack on the opponents of dam building, but what the succeeding events prove is that dams are no substitute for a coherent water strategy.

Greer's account goes on to chronicle how a lackadaisical attitude by Australian authorities was mirrored by broad public indifference to clear and timely warnings of what was to come.


The rest of the world might well be scratching its head. Though the rise of the Brisbane river had been predicted for many days, owners left their boats on the river, some of them moored to pontoons, which were themselves ripped from their moorings. Literally hundreds of pontoons went careering down the river, crashing into unmanned powerboats that were already cannoning into each other. A long section of the riverside walkway broke away and became a waterborne missile. A floating restaurant was sucked under a bridge. Some idiots went racing around in the brown surge on jetskis, unmindful of the half-submerged debris that could have smashed them and their jetskis to smithereens. People who insisted on staying in their apartments appear not to have understood that the electricity company would turn off the current, that their refrigerators would not be working, that they couldn't get to a supermarket and that the supermarkets that weren't flooded had no food left. They are the only people who don't know, unless they have a battery-powered radio, what's going on. It could be weeks before the water drains from Brisbane streets, so even these die-hards may have to ask for help from the emergency services.

The Australian floods show that the public will be lulled into inaction absent effective political leadership.  It is the responsibility of the political class, at all levels, to educate the public about environmental changes and threats, both imminent and distant, and to see that they're prepared for it.   Whether it's an earthquake, a tsunami, floods, landslides, wildfires, you name it - preparation and planning can greatly minimize loss of life and destruction of property.  The corollary to that is that political inaction costs lives and multiplies destruction, often many fold.


So what sort of planning and preparation do we get in Canada?  Pretty much bugger all.   How invested is our political leadership in addressing the very real environmental threats we face?   Virtually not at all would be a fair assessment.  They've got no end of time for squabbling over long or short census forms but no time to debate emergency preparedness or environmental awareness.  It's pathetic.  Australia has given us an invaluable lesson and a powerful wake up call but will it be for naught?
Posted by The Mound of Sound at 10:18 AM