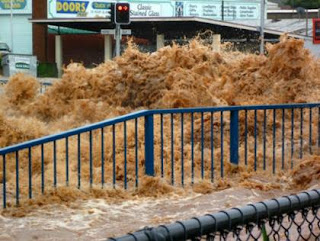 It's enough to make a Tea Partier's bag boil.  Climate change taxes.  What?  Don't laugh, your turn could come soon enough.  AlterNet reports the Australian government is toying with the idea of a general tax levy to fund reconstruction costs in the wake of recent, massive flooding.

A levy could take the form of an addition to the 1.5 percent Medicare levy backing public health and hospitals, and which raises A$10 billion ($9.9 billion) a year, the Australian newspaper said, without naming sources.

Australia, like most countries in the developed world, has a debt and deficit problem on its hands at the moment.   The government has a recovery plan but shelling out up to $20-billion or more in flood relief could toss that plan off the rails.  So to try to keep its economic plan alive the government may have to hit up the public for additional taxes.

Now, think of another debt-saddled country.   One that is vulnerable to severe weather events that are expected to increase in both frequency and severity.  One where the insurance industry is already refusing to cover these climate change related risks.  That's right, it's the United States of America.


Hurricane and tropical storm damage to the American south and its eastern seaboard and the spreading mega-drought to the south and southwest can be expected to trigger enormous, uninsurable losses.   Insurers long ago ceased writing hurricane coverage as far north as New York state and well inland to boot.  By 2030 America also faces the prospect of internally displaced people who find it necessary to move away from drought-stricken regions or coastal areas experiencing inundation.   Washington may well have no alternative but to spread the costs of reconstruction and relocation onto the shoulders of its citizens through special levies.   Can you hear the howling already, or is that gunfire?

Will Canada be spared these sorts of costs?   Perhaps but don't count on it.  Our own bread basket, southern Alberta and Saskatchewan, are within the severe drought projections for the early 21st century.
Posted by The Mound of Sound at 8:10 AM

Canadians will not be spared the costs if the brainless public falls for the hype. If the public does not buy into the bad weather con, then the Canadian goobermint will need to trick them another way. Same as always.

@Anon12:38 - I can't agree that we've "had the best democracy in decades recently" - not by any measure.