As anti-government protests in Egypt escalate, Nobel laureate and former IAEA chief Mohamad ElBaradei may have fallen captive to the Mubarak regime.

Louise Arbour, head of the International Crisis Group, has issued a release stating that Egyptian authorities are keeping ElBaradei bottled up in a Cairo mosque apparently to prevent him from leading protesters against the regime.  ElBaradei is a member of the Crisis Group's Board of Trustees.

The WikiLeak document dump has been culled yet again.  This time the trove was US diplomatic notes reporting that the Mubarak regime used torture routinely against criminals, Islamists, opposition activists and - wait for it - even bloggers.  Let's hope Harper doesn't get wind of that idea.

The Guardian reports that pamphlets are being circulated through Cairo to organize and direct protesters: 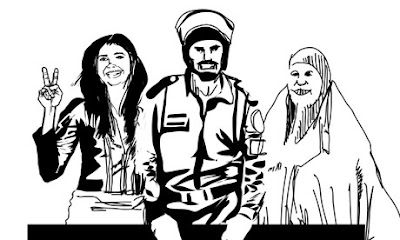 Signed "  long live Egypt",  the slickly produced 26-page document calls on demonstrators to begin with peaceful protests, carrying roses but no banners, and march on official buildings while persuading policemen and soldiers to join their ranks.

The leaflet ask recipients to redistribute it by email and photocopy, but not to use social media such as Facebook and Twitter, which are being monitored by the security forces.

Protesters in Cairo are advised to gather in large numbers in their own neighbourhoods away from police and troops and then move towards key installations such the state broadcasting HQ on the Nile-side Corniche and try to take control "  in the name of the people".  Other priority targets are the presidential palace and police stations in several parts of central Cairo.

It's hard to guess whether these protests will come to much.  When you look back to the seismic upheavals that led to regime change in Iran, East Germany, Poland and, most recently, Tunisia each saw the military either join the protesters or retire to their barracks which sent the secret police fleeing.   So long as Mubarak's military remains loyal and he remains able to dominate his ruling party then his secret police will be able to go after the protest leaders.
Posted by The Mound of Sound at 8:48 AM

Email ThisBlogThis!Share to TwitterShare to FacebookShare to Pinterest
Labels: Egypt