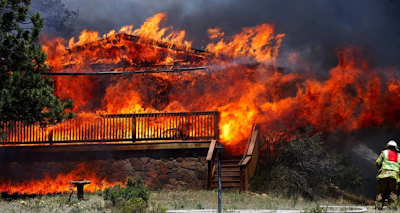 You may have heard about the waves of wildfires sweeping across Colorado for the past several weeks that continue to rage with no end in sight.   Welcome to the new era, the era of Global Warming.

"'What we're seeing is a window into what global warming really looks like," said Princeton University's Michael Oppenheimer,  a lead author for the UN's climate science panel. "It looks like heat, it looks like fires, it looks like this kind of environmental disaster … This provides vivid images of what we can expect to see more of in the future."

"In Colorado, wildfires that have raged for weeks have killed four people, displaced thousands and destroyed hundreds of homes. Because winter snowpack was lighter than usual and melted sooner, fire season started earlier in the US west, with wildfires out of control in Colorado, Montana and Utah. 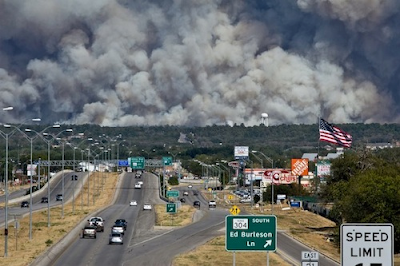 "The high temperatures that are helping drive these fires are consistent with projections by the UN Intergovernmental Panel on Climate Change (IPCC), which said this kind of extreme heat, with little cooling overnight, is one kind of damaging impact of global warming.

Others include more severe storms, floods and droughts, Oppenheimer said.

"The stage was set for these fires when winter snowpack was lighter than usual, said Steven Running, a forest ecologist at the University of Montana.

"Mountain snows melted an average of two weeks earlier than normal this year, Running said. "That just sets us up for a longer, drier summer. Then all you need is an ignition source and wind.'"

Britain, meanwhile, has come off an extended, nationwide drought to endure widespread, once a century flooding.   Severe storms and torrential rains have triggered flash floods, power outages, the closure of rail lines and the evacuation of hundreds of homes.   This, too, is a predicted outcome of global warming - cyclical severe droughts and floods. 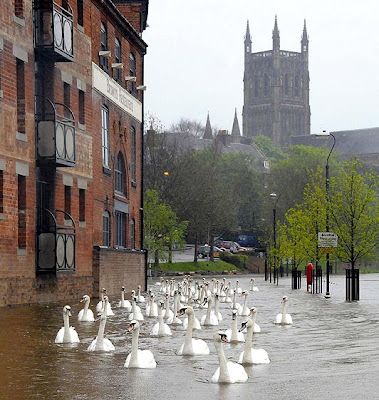 The reality is that we have already broken the Earth's hydrological cycle.  We have heated the atmosphere which causes it to absorb and hold more water vapour.   Those trillions of tonnes of water vapour change precipitation distribution patterns.   Some regions get passed over and wind up in sustained drought, as in the American southwest.   Other regions now receive torrential rains and flooding.   Drought or flood, the affected regions are hammered.   That is not the sort of conditions necessary for agriculture.   It makes little difference whether crops wither in the field from drought or rot away under floodwaters.   It makes little difference whether cattle die of drought or drown.  For a world that the UN FAO has already declared to be now in a permanent state of food insecurity, the fracturing of our traditional hydrological cycle, so instrumental in mankind's growth to 7+ billion people, is potentially devastating.

But, as we were told this week by the CEO of Exxon Valdez ExxonMobil, sure fossil fuels are warming the planet but, don't worry, be happy, we'll adapt.   Rex Tillerson told the Council on Foreign Relations that concern about climate change, drilling and energy dependence are overblown.

Well, since Mr. Tillerson has broached the subject, perhaps we should consider his views on adaptation.  Adapt how, to what, on whose tab, Mr. Tillerson?

Adaptation comes in two flavours - public sector and private sector or some combination of both.  Think Disaster Capitalism.   Yet governments today have been so effectively defunded that the private sector will likely have a powerful edge in future adaptation initiatives.   And, as we have seen in so many other areas, the more private sector a field becomes, the more market-driven, the less universal it turns out to be.

Adaptation is not uniformly viable.   There's a lot more "me" and a lot less "we" in it despite Tillerson's sophistry.   The countries and peoples who will need the greatest, most powerful adaptation strategies also happen to be the poorest, most vulnerable, and most heavily impacted by global warming.   Tillerson's facile commentary pretty obviously excludes these peoples as irrelevant, invisible.

But maybe we ought to regard Tillerson's adaptation remedy in the context of Big Tobacco.  Throughout the West, the tobacco industry is being sued for many hundreds of billions of dollars in damages for the costs governments have borne from smoking-related illness.   Why should Big Fossil be treated any differently?  Why should we not look to oil, coal and gas company assets to fund adaptation measures necessitated by the burning of fossil fuels?   We know from the track record of Tillerson's own company in paying damages to those who lost so much from the Exxon Valdez tanker disaster that we can't trust Big Fossil to own up.

If nothing else we should be having a frank discussion with Mr. Tillerson and the other Tillersons who make up Big Fossil about just what responsibility they think they should bear in the question of adaptation.  That's a talk that's already long overdue.
Posted by The Mound of Sound at 8:58 AM

How do we adapt to, a global shortage of food, with no clean water to drink? The destruction of prime farmland, as happened in Alberta. In BC, the site-C dam that will flood the most valuable farmland in Canada. Rumor has it, the dam will be used for fracking.

Oil spills are impossible to clean up. Enbridge is the worst, they have spilled oil all over the place, poisoning everything in the oils path. They never clean up their spills.

It is as they say. Man is the most destructive animal on earth...and, the most stupid one at that.

I seriously doubt that the Tillersons of the world would indulge the little people by having a frank discussion about anything. Just consider what Lloyd Blankfein of Goldman Sachs said: "We are doing God's work".

I don't know if this reflects a Straussian or Randian philosophy adopted by extreme capitalists. Or maybe it just indicates outright psychopathy. But I do know that a frank discussion about changing their behaviour for the long term benefits of all humanity is out of the question.

So the sentiment is screw you and your ilk are not gods people only harper and enbrige is...

@Anon 10:34. How do we adapt? That depends on several factors including the point at which we decide to act. The longer we wait the more radical, costly and ineffective will be the adaptation strategies remaining to us. The best are already being foreclosed, something that's been a reality for two decades or more already.

@Anon 1:48. Have you ever watched the documentary, "The Corporation"? It's highly relevant to the question you pose. It employed an FBI profiler who evaluated the operating principles of corporations and opined that, in a human context, they defined sociopathy.

Corporations are inherently anti-social because they were never intended for such purposes. It's more than unfortunate that the US Supreme Court failed to recognize that in the Citizens United ruling. The court has now injected a combination of sociopathy and virtually limitless wealth to skew American democracy. Breathtaking.

Yes, Mog, I agree. Yet it's the people who have allowed this to happen and many of us venerate "our betters."