An Expert on Nuclear Nonproliferation Takes the Measure of Donald Trump 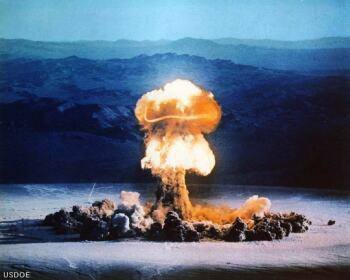 Avner Cohen is a professor of nuclear nonprolifteration studies at the Middlebury Institute of International Studies in Monterey, California. Nuclear weapons and policy are his thing. When it comes to the idea of Donald Trump getting America's nuclear codes, professor Cohen is, in two words - scared shitless.


For more than seven decades – from the administration of President Harry S. Truman to that of outgoing President Barack Obama – a kind of political and diplomatic taboo formed in the United States: Nuclear weapons are not a subject for public discussion, and certainly not without preparation. Nuclear weapons should be treated as a special case, one that is beyond the accepted political discourse. This taboo, the product of a custom that is not enshrined in any law, is considered a means of measuring presidential responsibility.

Last month, though, in the blink of an eye, President-elect Donald Trump spit on this sacred taboo in a Twitter post. “The United States must greatly strengthen and expand its nuclear capability until such time as the world comes to its senses regarding nukes,” he tweeted on December 22. There are some who say Trump is so ignorant, he is completely unaware of the power of that nuclear taboo.

Trump’s tweet was blatant defiance of a U.S. policy that goes back to the time of President Ronald Reagan, a policy five subsequent presidents have stood behind. It holds that the United States seeks to reduce nuclear arsenals and the role atomic weaponry plays in global diplomacy.

The following day, after Trump’s advisers sought to put a different spin on their boss’ foolish statement and claim that it was nothing more than a comment on the dangers of nuclear proliferation, Trump amazed the world yet again. In an interview that was meant to minimize the damage, and in response to the claim that such a tweet could spur a renewed global nuclear arms race – or at least legitimize it – the president-elect nonchalantly told a reporter: “Let it be an arms race … we will outmatch them at every pass and outlast them all.” In less than 24 hours, Trump had twice violated the basic no-no of the nuclear age.

All of Trump’s tweets, including the embarrassing series of comments about a former beauty queen, demonstrate that he is impulsive, unbalanced and not in control of himself, a person responding immediately to every provocation, whether large or small, that exceeds his threshold. His responses are knee-jerk reactions and not subject to a common-sense review, whether by Trump himself or his institutional gatekeepers.

...But not only did the clearly unqualified candidate win the election; he will also take possession of the briefcase with the nuclear codes. Now he is tweeting nonsense about things he knows nothing about, on subjects his predecessors as president always treated with reverence. There’s no knowing whether Trump is tweeting his crazy thoughts to the world as a narcissistic act or one of megalomania and arrogance. But since these thoughts now have the aura of a future presidential policy, they are truly frightening.

On January 20, when Trump becomes the one with the nuclear codes, the world will be entering an era of uncertainty and fear, the likes of which it hasn’t known since the end of World War II.
Posted by The Mound of Sound at 1:26 PM

.. an old saying 'he was running his mouth' comes to mind re the pompous ass named Trump.. Don't hold any expectations Trump with 'find his way' .. or wiser heads will prevail. The debt laden highly leveraged idiot is on a late life ego trip to/from hell. Round trip baby. He lives life like its a carousel, round n round he goes, spinning madly, & where it ends nobody knows.

Make America Great Again ? ? What? Does he dream this shite up on the golden toilet.. or is it just stream of nonsense ego jacking? The snout just cannot shut his pie hole.. his mouth is a separate creature from a depraved fanatasy land. The scam of Trump University is quite informative.. in fact a blueprint for his next great flim flam failure.

Whether mainstream Media can summon the courage to shout this conceited prick down & warn American society to wake up, is the burning question. It sure won't be the GOP who are falling all over themselves to cash in while the fool is throwing around opportunity & tickets to ride. What a scumbag.. and so are they .. stunning to see it evolving and melting down

It's not so simple.
There are checks and balances; not foolproof( pardon the pun) but checks non the less.

Did I miss something??

As a race, never mind nationalism, we are friggen stupid.

What the **f drives us to such idiocy?

Sal, I think you've neatly captured the dark essence of the Great Orange Bloat. I'm struck by his level of ignorance as much as his lack of curiosity. He simply doesn't want to know.

TB, yes there are some checks but if an expert on nuclear nonproliferation is this concerned I'm not feeling secure. Professor Cohen would be what we used to call "the pro from Dover." I tend to listen to that sort of authority.

TB, thanks for the link. It could be that, in the 10 years since that study came out, Vlad Putin got the message. That would certainly account for Russia's new generation of boomer subs and its new classes of intercontinental and medium range nuclear missiles. This year or next Russia is also scheduled to deploy a new nuclear strategic bomber. Some of these systems are supposedly in violation of US/Russian treaty obligations but that doesn't appear to be stopping the Kremlin.

Trump's enemies appear to mostly be other Americans.

Makes me wonder about the future of Sacramento and Albany.

I' not certain he's compes mentes enough to understand that launching missiles against US state capitols would be a very bad thing to do and I'm not at all convinced the Joint Chiefs would stop him. US military personnel (especially the Air Force which is a viper's pit of radical jeebus fuckers) have by and large already made their position clear, as has law enforcement. There are plenty of theocrat Rethuglican assholes who wouldn't have a problem with eradicating those hotbeds of godlessness.

The upper limits of Trump's lunacy are totally unknowable and the possibilities are unfathomable.

And here's one of the opening salvos: http://www.nbcnews.com/politics/congress/house-gop-votes-move-ethics-oversight-under-its-own-control-n702471

Hi Dana. Yeah I read about that move to gut the Congressional ethics monitors. Democracy heading for the ropes - and then the mat.

The last best hope for humans is a "professional" military clique at the Pentagon.

To think that we thought Dubya was dumb and happy about it. He was but Trump takes the cake. His nuclear weapons are nice and fresh:

The devil is in the details,
The link shows that the controversial F35 can carry TWO nuclear weapons..
Is there any wonder that Russia would bolster it's 'short' range missiles which would only be usable against an aggressor?