The 70 Year Old "Troubled Teen" With the Nuclear Launch Codes 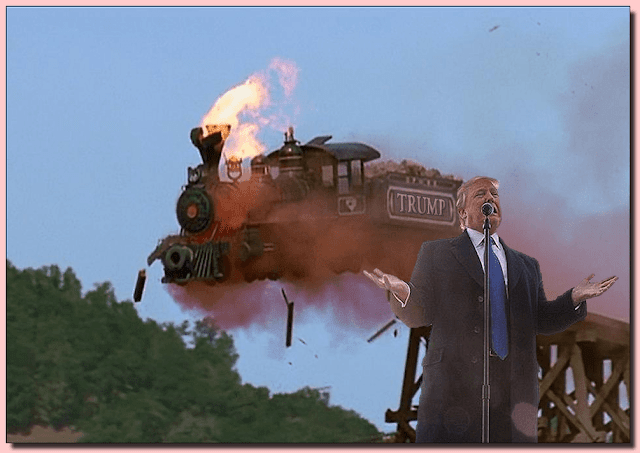 I expect that a 12-year old boy who exhibited Donald Trump's personality disorders would be heavily medicated. Ritalin to be sure. IV Ritalin? Not sure if that's even a thing.

To say that Donald Trump lacks the stability, aptitude and skill set required of an American president today is a grotesque understatement. Yet, in a matter of days, he'll be installed in the White House. To the American people who voted for him, thank you, you miserable peckerheads.

As Princeton professor, David Bell, concludes, Donald Trump is the ultimate loose cannon. "It's now all too easy to imagine his troubled personality leading to his country's collective fall."

What is a "loose cannon" anyway? In the days of sail it was a cannon that slipped from its restraints in the midst of a battle or storm and endangered both the ship and crew. Today it's used to mean an uncontrollable or unpredictable person who can damage or destroy his own faction, political party or even nation.

The Democrats no longer have the means to stop him and the Republicans in Congress lack the courage to stand up to him. Worse yet, he's assembled a cabinet of dodgy characters who, almost to a man, play to his every flaw.

Kevin Phillips, in his 2005 book, "American Theocracy," offers a helpful exploration of how power transitions from one dominant power to its successor. There is a pattern. America has been on this very glide path for the last 30 years.

In Phillips' model, the superpower rots from the inside out. The decay begins when it abandons the core economy that brought it to the top of the heap - manufacturing. It yields to the allure of much greater wealth to be had by restructuring to a FIRE (finance, insurance, real estate) economy while its enterprises outsource their manufacturing sector elsewhere. In this way the dominant power uses its power and wealth to grow what eventually becomes its successor's economy.

Eventually there's some seismic economic event, war perhaps, and the once dominant nation slips to a new steady point, making way for the next king of the hill. The nation in decline doesn't collapse. Usually it just falls into line behind the new dominant economy.

Anybody else smell the faint scent of a seismic event in the air? Maybe it's just me.

Isn't bringing manufacturing jobs back to the US a big part of what Trump says he would do?


Yes, Hugh. He's said many things. He can't bring back the manufacturing jobs that America once enjoyed. They're gone, replaced by a minimal-wage reality. North Americans simply can't live off the wages those jobs are commanding today.

I read an interesting analysis a couple of years back by a US labour lawyer/economist. He pointed out that manufacturing historically returns stable profits of 3-4%. Wall Street works on margins three to four times that. American capital will no longer accept the modest but stable returns that made the US great and provided the foundation for its once robust, vibrant and broad-based middle class.

Ford played Trump. Their new plant will be in the US, but it will be of the next generation. Long on robotics , short on jobs. When Ford applies what they learn from this plant elsewhere the US will end up losing more jobs.


Curious, Rumley, that it was Henry Ford who understood that a car plant is useless without a buying public earning enough to consume the production. That's why he chose to pay his workers well above the going rate. He wanted, needed, each of them owning and driving a Ford.