Donald Trump thinks of people in terms of ratings. He's fond of tweeting that this critic or that is "grossly overrated." He couldn't resist taking a swipe at Arnold Schwarzenegger for this modest ratings as host of The Apprentice.

On Friday Donald Trump will be facing his own ratings war - the inauguration. His competition? That'll be the last guy, Barack Hussein Obama. He set the bar by which Trump will stand or fall.

I suspect you can still recall that inauguration celebration for the last incoming president eight years ago. In common parlance you could say that Obama "rocked" Washington and every other American city on January 20, 2009.

But this is Trump's January 20th and it's shaping up to be a lot different. His staff spent weeks trying but failed to get any  A-list talent to perform. They finally settled for Toby Keith.

The 2009 concert "Obama's We Are One: The Obama Inaugural Celebration At The Lincoln Memorial" had a list of performers so star-studded I'm shocked anyone was able to watch it without going totally blind. Brace yourself, because the list of performers included Master Sgt. Caleb Green, Bruce Springsteen, Mary J. Blige, Jon Bon Jovi with Bettye Lavette, James Taylor with John Legend and Jennifer Nettle, John Mellencamp, Josh Groban and Heather Headley, will.i.am with Herbie Hancock and Sheryl Crow, Renée Fleming, Garth Brooks, Stevie Wonder with Usher and Shakira, U2, Pete Seeger, and, of course, Beyoncé.

Who needs people like them when you've got Toby Keith? Garsh.

Trump is hyper-sensitive to appearances, especially his own. This one is going to burn.

Notice the photo above. In 2009 the crowd completely filled the National Mall all the way back to the Washington Monument. Standing room only. Packed like sardines.

Update: Speak of the devil. 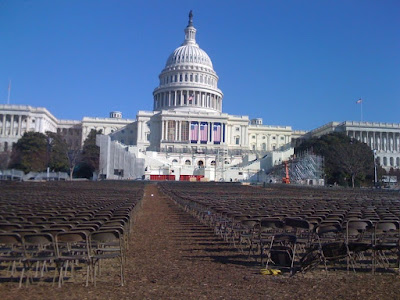 Is Donald Trump’s inauguration crowd going to be bad or the worst in modern American history? He’s only been able to draw a handful of D.C.-area wedding DJs and a handful of county fair musical acts. A growing list of congressional representatives have pledged to boycott the event and a D.C. council member says they’ve only received 200 bus applications (versus 1,200 for the protest march the very next day.)

But, perhaps the most telling sign this is shaping up to be an embarrassing disaster for Team Trump is the fact that only six days out from the event, Donald himself took to Facebook to record a message begging offering free tickets to anyone who wanted to attend. If you make it through the ceremony, he’ll throw in a set of steak knives and you’ll be entered to win a complimentary trip for two to the luxurious Mar-A-Lago resort. (Okay, that last bit is not true, but it could be!)