The March of the Ichthyes 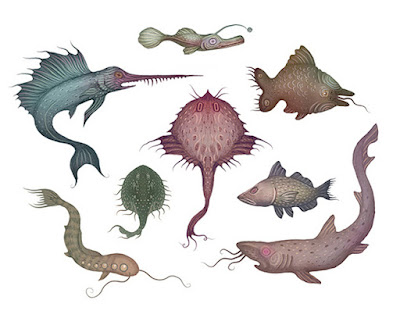 Okay, they're ichthyes, fish, and they don't march, they swim. And swimming they are in the same direction, away from the equator.

We've been seeing signs of this aquatic exodus in the waters off Vancouver Island but The Guardian reminds us it's a global phenomenon.

Scottish fishermen have uncovered an intriguing way to supplement their income: they have added squid to the menu of marine creatures they regularly pull from the sea. A species normally associated with the warmth of the Mediterranean, rather than the freezing north, may seem an odd addition to their usual catches of cod and haddock. Nevertheless, squid has become a nice little earner for fishing boats from Aberdeen and the Moray Firth in recent years.

Thirty years ago, squid was a rarity in the North Sea. Today, boats bring back thousands of tonnes a year – though cod and haddock still dominate catches. Nor is this warm-water addition to northern fish menus a unique feature. Red mullet, sardines and sea bass have also appeared with increasing frequency in North Sea fishermen’s nets in recent years. All of them are associated with warmer waters and their appearance is seen by many scientists as a sign that climate change is beginning to have a serious impact on our planet’s oceans.

For Scottish lovers of fresh squid, this is good news. However, in many other parts of the world, rising sea temperatures – triggered by climate change – are providing fishing industries and governments with major headaches. Fish are moving hundreds of miles from their old grounds, sometimes out of zones that had been set up to protect them. In other cases, fish are simply disappearing from nets.

What makes this migration especially vexing is that, for the Third World, fish represent the main source of animal protein and now that food source is leaving for cooler climes.

As the prey fish - think herring and sardines - migrate, their food chain follows. Bigger fish want/need to eat smaller fish, can't be helped. To people of the Third World, for whom it's fish or nothing, they're part of that food chain and, as their fisheries suffer, it adds to all the other environmental strains that compel the disadvantaged to relocate/migrate.

Reader Chris has provided a link to an excellent essay by Colin Woodward published in the Portland (Maine) Press Herald detailing what's now underway along the stretch from America's northeastern seaboard to the Maritimes. It's an impressive article for anyone interested in this early-onset impact of climate change.

Still not depressed enough? Here's a piece from the east coast that'll fix that. It's very long and in 6 parts. tl;dr: The Gulf of Maine is warming faster than anywhere else on Earth except for a piece of the Pacific north of Japan. For sea life (and seafood) this is a catastrophe happening in real time.


Thanks for the terrific link, Chris. I incorporated it as an update to the post. I've read - and posted on - this Atlantic problem before but this essay was the best I've ever read on the subject. Again, many thanks.

The piece hit me hard because, with a short drive, I can stand in the northern tip of the Gulf. Some of my friends make their living from it. For now anyway.