Who Knew? Oh Yeah, Just About Everyone.

When it comes to the Western world, the United States of America scores dead last for electoral integrity and free and fair elections and that's not even counting the 2016 elections. From the London School of Economics, U.S. Politics and Policy project:


So are American elections actually as exceptionally bad as claimed? Here for evidence we can turn to the Variety of Democracies (V-Dem) project based at the University of Gothenburg, an independent academic study involving a team of over 50 social scientists on six continents. The latest version of the dataset (V6.2) covers 350 indicators and 30 democracy indices in 173 countries annually from 1900 to 2012. This project has been widely acknowledged; for example, last year it received one of the most prestigious dataset awards in American political science. What does the V-Dem evidence show about how the quality of American elections compared with contests around the rest of the world?

V-Dem gauges the quality of elections using dozens of indicators such as those concerning voting rights, campaign media, the extent of any problems of opposition boycotts and electoral-related violence, and the independence of the electoral management body. For a summary measure, V-Dem asks its expert respondents: “Taking all aspects of the pre-election period, election day, and the post-election process into account, would you consider this national election to be free and fair?” Responses to this item, averaged for the period from 2000 to 2012, can be compared in 161 countries.

As shown in Figure 1, out of 28 Western democracies, according to the V-Dem data, the US ranks last. And this was well before the 2016 election, which isn’t yet in the V-Dem dataset. The United States is clearly exceptional. 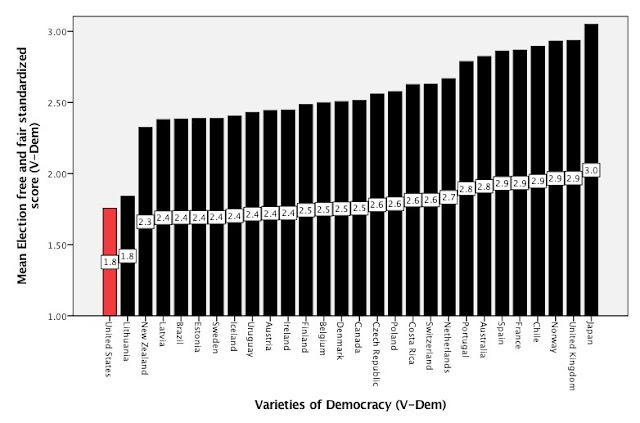 As you will see Canada isn't doing all that well either, coming in at a mediocre 2.5 and trailing Japan, the UK, Norway, Chile, France, Spain, Australia, Portugal, Netherlands, Switzerland, Costa Rica, Poland and the Czech Republic.

The U.S. did however handily beat East Timor, Liberia, Libya, Kyrgyzstan and even narrowly edged out Myanmar, Romania, Kosovo and the Dominican Republic.

But here's the worst part. Yes this is going on across the United States and in many forms - minority voter disqualification, gerrymandering, robocalling, big money and media manipulation - and now even the FBI and the Russians are gaming the vote yet the American people largely stand complacent, indifferent. They don't care that the democracy they purport to so patriotically embrace is now so degraded that it has reached the level of Myanmar, Romania and Kosovo. That is a people who have allowed themselves and their country to be brought low.

We ain't seen nuthin yet!

Kris Kobach and, I believe, Hans von Spakovsky are part of the Trump cabal. The federal voting ID law will be a lasting monument to Freedumb.