Hmm, One of these Is Not Like the Other. 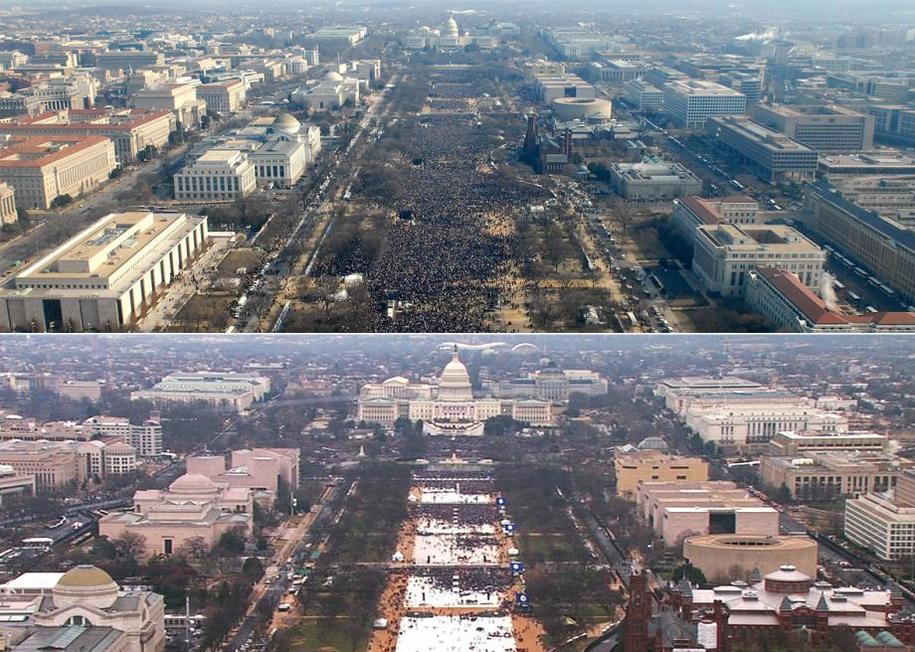 The top photo shows the inauguration of the first black president; the bottom shows the inauguration of the latest in a long line of racist white presidents. Obama's crowd stretched before him like an anaconda from the Capitol to the Washington Monument; Trump's barely reached the Smithsonian bridge. I'm sure Trump will claim yesterday's cold was a factor, if you catch my drift.

Line up the two domes on the left in the bottom picture with those same two domes in the top photo. And Trump's new press secretary, Sean Spicer, castigates the media for not reporting that Trump's was the largest ever inaugural turnout. Oh, I think they're off to a fine start.

I wonder which of his flunkies will suffer the consequences for this one. I guess the rust belt can expect more victory tours, this time at public expense and under some contrived pretense, so the boy can recover his self esteem.

By Spicer's comportment at the emergency press scolding, you could tell he's almost had enough after one day. I expect most members of the staff will require a meds review before Trump does.

I first saw this I think late Friday evening. The literally very first thing I noticed wasn't the difference in numbers size, it was the perspective of the respective pictures themselves from where they appeared to be taken. The Obama one clearly was from farther back, the size of the Capitol Dome makes that hard to miss. So then I did exactly what you did, because I wanted to get a proper alignment in my head for the two photos. In the Trump picture, the building being cut off at the left back is, on the Obama photo, almost exactly the halfway mark between the Capitol Building. If you look closely at it, you can tell in the Obama pic it is the middle of the four great buildings on the left, whereas on the Trump pic you get the first two and maybe a third of the next. Just that alone shows just how fewer the numbers were given that there is clear density of people throughout that pic of Obama's, whereas Trump's, well,,,lying eyes and all that.

Then to hear this bit about how well this is the first time there was white ground protector used, and that is all the difference in look really is, or had you heard that one out of Spicer in all that nonsense, which as it turns out is false since they were used at Obama 2013, according to footage, but again, lying eyes. Yet as bad as listening to Spicer on this was, it paled in comparison to watching and listening Trump do his popularity spiel in his first visit to the CIA/IC as President, in front of the wall of honour. I have to wonder just how many in the IC world, not just the CIA, were repulsed and revulsed by what they just saw their new President do. I may believe he is illegitimate and that he is there because of a corrupted process, but so far at least he is also the legal de facto President with all the authorities that come with it, and to pretend otherwise I actually believe shields him somewhat. So everything he does has to be seen in that light, as much as it feels wrong, or like we are trapped in a bad B movie from the 50s, or worse, a seriel from the 30s. What's a poor Bride of Chaoitica to do in these days...*weeps gently...well, not really*

Seeing how paltry his turnout was for Inauguration compare to what showed up Saturday clearly really got under TrumpleThinSkin's surface, not that is hard to do of course, and combined with how it so obviously was a pale shadow (in oh so many ways that can be taken) of Obama's first Inauguration someone is clearly feeling size challenged ion all the real legitimacy measures. The pics you used are bad enough, but when you can add the rally/march pics from Saturday, it should be even more upsetting for Trump, since it looks like his Inauguration was met by over at least twice the number to protest it as turned up to see him become President.

And I thought the Naderites were deranged in thinking that between GWB and Gore, but between HRC and Trump, Gore/Bush almost really were the same thing, which in itself shows just how bad this truly is.

This inauguration had all the makings of a National Lampoon "vacation" movie.