Remember Who Did the Heavy Lifting Last Time 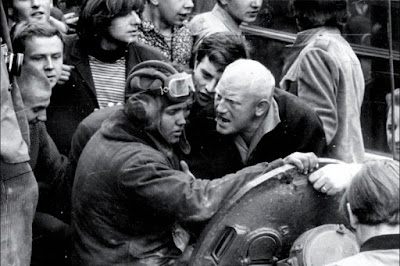 As liberal democracy gives way to authoritarianism from the United States to Hungary, Poland, Turkey and even into Britain and France, it is helpful to remember the turbulent 50s and 60s, an era that saw uprisings against Communist regimes imposed by the Soviet Union.

In Hungary, Czechoslovakia and elsewhere a powerful resistance movement emerged, one that would eventually undermine the Iron Curtain and lead to the liberation of Eastern Europe.

As Jan Surotchak reminds us, it was the intellectual elite who defied - and finally defeated - tyranny.


Today is the 40th anniversary of the Charter 77 Declaration, the foundational document for pro-democracy dissidents in Communist Czechoslovakia. On January 6, 1977, 242 leading writers, artists, musicians, poets, workers, and politicians published what was then a revolutionary demand: for their government to live up to the human rights commitments in the country’s own 1960 constitution, the 1975 Helsinki Final Accords and the various United Nations covenants on political, civic, economic and cultural rights signed by the communist government.

...On their way to present the Charter 77 Declaration to the Czechoslovak Federal Assembly and the media, Vaclav Havel, Ludvík Vaculík and Pavel Landovský were stopped by the state security forces. Along with other signatories, they were detained and interrogated, and their houses were searched on the same day, with all printed materials confiscated.

...physical copies of the Declaration had been spirited out of Prague by émigré friends of the main organizers and it was printed on January 7 in the leading German, French, British, Italian and American newspapers. Charter 77 quickly became synonymous with the Czech dissidents themselves, and the group became the focal point of pro-democratic resistance throughout Central and Eastern Europe. Havel and his compatriots achieved semi-celebrity status abroad, and their voices were amplified at home as Western media penetrated the Iron Curtain.

This, of course, brought the full fury of the police state down on Charter 77 activists, and many suffered greatly for their support. Just one week after the Charter’s release, the Prosecutor General, the Chairman of the Supreme Court, the Minister of Justice of the Czech Socialist Republic and the Prosecutor General of the Czech Socialist Republic kicked off twelve years of relentless persecution, accusing the declaration of "evoking hatred and hostility towards, or at least distrust of, the socialist social and state system of the republic.”

...Sadly, Europe today again needs its elites to stand against regimes that criminalize free thought and free expression and flagrantly disregard international commitments that have helped keep the continent (mostly) at peace since 1945. With Moscow back in the business of punishing dissent at home and spreading false narratives abroad, we’d do well to remember the lessons of January 1977.

For all his faults, Allan Bloom, in his The Closing of the American Mind, predicted that there would be repercussions from lowering educational standards, particularly in universities. Our post secondary institutions are cranking out degrees in pseudo sciences that qualify graduates unable to think beyond their own little corners.

The loss of critical thinking, in education, seems almost universal.
The loss possibly started at different places at different times and for different reasons.
Political radicalism by senior secondary school teachers , interference of donor grants to universities , indifference of parents at the junior level etc.

Whilst teachers vent their views whilst promoting education their pupils seem brain dead with seldom a political or social heartbeat that does not have a business backing!!
Universities have become commercial/industrial enterprises that by their very structure would never challenge the status quo for fear of the loss of income.

@Toby
When universities start promoting themselves on the basis of the employment rate of their graduates you know they have ceased to be providing education, but instead job training, no longer universities, but trade schools.

The powers that be have conflated "training" with "education."


Even back when I was a law student (yes, smart ass, we had ball points not quills), we were debating this. I did two courses in jurisprudence, basically the philosophy of law, given by a visiting prof from Trinity University, Liam McCaughey. It was a dying subject even then. Students wanted to pursue the "trade" courses such as corporate law, tax law and such, the subjects they imagined would make them ready earners right out of the box. Few had time for fanciful matters such as jurisprudence.

Ironically, my choices served me well. By getting some familiarity with the evolution of law through the centuries, a few times I was able to call on precedents, case law, from four to five centuries past. It was possible to make some very powerful arguments with that sort of jurisprudential foundation.

Law was always intended to be three-dimensional. Sadly, today it's two-dimensional at best. We've succumbed to the simplicity and ease of statute law. Even Equity is no longer a required course. It's no wonder that firms can now outsource basic legal work to countries like India and there's even talk of robotics.