The Gift That Just Keeps On Giving


Not all greenhouse gases last for hundreds of years. Some compounds such as chlorofluorocarbons and methane can linger for much shorter durations, a year to a couple of decades. Yet, even when they dissipate their impacts can continue for centuries.

A new study by researchers from MIT and Simon Fraser University finds that these short-lived GHGs can cause sea level rise that continues long after they're gone from the atmosphere.

Recent studies by many groups ...have shown that even if human-caused emissions of carbon dioxide were to stop entirely, their associated atmospheric warming and sea-level rise would continue for more than 1,000 years. These effects — essentially irreversible on human timescales — are due in part to carbon dioxide’s residence time: The greenhouse gas can stay in the atmosphere for centuries after it’s been emitted from smokestacks and tailpipes.

In one particular climate modeling scenario, the team evaluated sea level’s response to various methane emissions scenarios, in which the world would continue to emit the gas at current rates, until emissions end entirely in three different years: 2050, 2100, and 2150.

In all three scenarios, methane gas quickly cleared from the atmosphere, and its associated atmospheric warming decreased at a similar rate. However, methane continued to contribute to sea-level rise for centuries afterward. What’s more, they found that the longer the world waits to reduce methane emissions, the longer seas will stay elevated.

“Amazingly, a gas with a 10-year lifetime can actually cause enduring sea-level changes,” Solomon says. “So you don’t just get to stop emitting and have everything go back to a preindustrial state. You are going to live with this for a very long time.”

Here's the thing. This is a worsening crisis to which our political caste responds with pretend solutions, i.e. carbon pricing. That horse, the creature that might have been tamed with carbon pricing, has left the barn.

Oh, by the way, I know it's cold pretty much straight across Canada, including here on Vancouver Island, but it's a different story in the far north. This is data from yesterday, 9 January, 2017. The Arctic, you may recall, is in the midst of winter dark. No sunlight, 24 hours a day. Yet it's still in the throes of an Arctic heatwave. Just like this time last year. Any guesses? 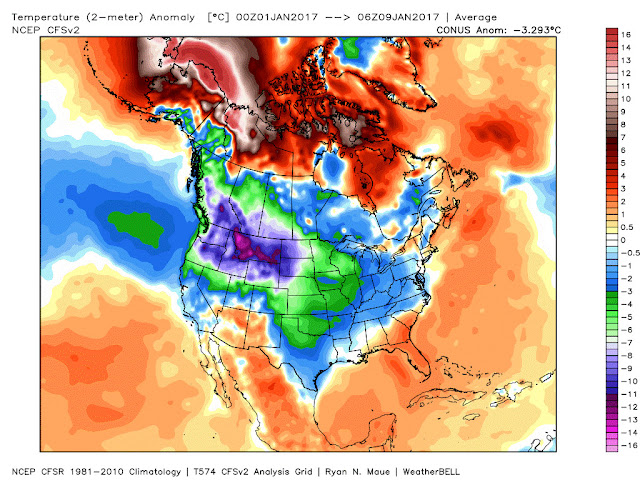 Carbon pricing itself isn't the problem. The problem is the lack of political will to set the price high enough.

Of course, if politics didn't ruin the day for all of us, our 'leaders'would also be encouraging a drastic reduction in beef consumption, given that the cattle industry is one of the leading producers of methane gases. Here in Canada, of course, it would be decried as yet 'another attack on Alberta.'

Then again, if I wanted to be really dark, I would suggest that few people would heed such a call anyway, since it would entail a lifestyle change.