The Word From the Nerd 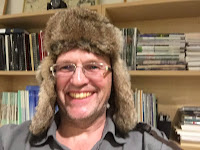 He's a nerd. He may just be the most nerdy climate scientist on the planet. And, he's Canadian. He works within a short walk from Justin Trudeau's office but, judging by the prime minister's Orwellian pronouncements on climate change, it's a safe bet Trudeau has never heard of Paul Beckwith of Ottawa U's department of paleoclimatology.

I follow Beckwith on YouTube. He's a big poster of videos, often 3 or 4-part series, on the latest in climate science news. In his own awkward style he discusses what science is uncovering and explains what it means to you and me.

Of late he's been focusing a lot on the mayhem underway in the Arctic which, for good reason, Beckwith calls a "climate emergency." He calls it that because, well, it is.

Of course Beckwith isn't some solitary voice in the wilderness. There's no shortage of climate scientists shouting the very same dire warnings. Yet there's no commensurate sense of urgency wafting down from Parliament Hill. No, we've got a leader up there who is positively giddy over Donald Trump's decision to drive through the Keystone XL pipeline.

Most recent offerings are a 3-part series on "Food Disruption, Climate Change, and Ocean Sources of Food."  There's another 3-parter on "Arctic Ocean Sea-Floor Methane Farts" that's a real gas (sorry, I'm sorry). Beckwith offers a 4-part series on global sea level rise. He also explains the significance of the recent Arctic Report Card and discusses ocean acidification. Be sure to check out "Our Climate Change Emergency and Three-Legged Barstool Survival."

The good news. Paul Beckwith is no Guy McPherson. The University of Arizona professor emeritus has been taking to YouTube and the lecture circuit with the message that the end is well and truly nigh as in within 10 years. Beckwith stops well short of that but his message is clear - we are in a grave climate emergency and doing what our prime minister is doing is not an option if we want a world for our grandkids to live in. It's just that simple.
Posted by The Mound of Sound at 9:42 AM

Global warming will likely be a blessing for Trudeau, Mound, since it is becoming increasingly apparent that the emperor has no clothes.


Sorry, Lorne, but you've lost me.

I was just trying to archly remark on the disparity between Trudeau's pronouncements on climate change and the enthusiasm with which he is embracing pipeline building, Mound. The true believers. I think, will soon have their faith deeply shaken. I just thought that as he is exposed, (the emperor without clothes), he will likely prefer the warm winds that climate change provides rather that catch a chill.

Sometimes I think I am being clever, but it turns out I am a cult of one.

"Sometimes I think I am being clever, but it turns out I am a cult of one."

Trudeau's declarations of the need to get off oil remind me of the young Augustine's, "Lord, give me chastity and continence but not yet."

I agree, Toby. Trudeau, following in the footsteps of Harper, is moving Canada from a country that's doing next to nothing to a nation that's bent on doing what it can to worsen the Earth's predicament. All his talk about phasing out oil - eventually - is pure bullshit. Like Trump, Trudeau depends on a field of Gullibillies. We don't have until "eventually" to act. His carbon tax nonsense won't offset the added GHGs from ramping up Tar Sands production. Worse yet, he isn't tying government royalties to climate change programmes for mitigation and adaptation. That's going right into the treasury, every dime of it. Which is all you need to know to understand that he's a fraud.

Sorry, Lorne, I should have got that. No excuses. Well, maybe a couple. The fact is that Trudeau is opening taps he'll be unable to shut even if he was so inclined and I'm convinced he's not.

He knows there's no means in hell to clean bitumen off the bottom of the Salish Sea. He knows how devastating a spill would be to coastal BC. He knows a spill is a matter of when and how often, not if. He stacks his personal political fortunes against that and, surprise, he wins. He's a duplicitous little shit, that's for sure.

A small quibble, Mound. The federal government certainly receives tax revenues from the oil and gas companies, but only the provinces receive royalties. It's been a while since I studied constitutional law, but I don't think Trudeau has any way of tying royalties to climate change programmes.

I expect you're right, Cap. Royalties go with ownership and the Tar Sands are definitely the property of the State of Alberta. That said I'm not aware of anything that could prevent Trudeau from directing the funds flowing into the federal treasury to specific policies and initiatives.