Isn't That Biting the Hand that Feeds You? Trump Accepts Russia Hacked the Election. 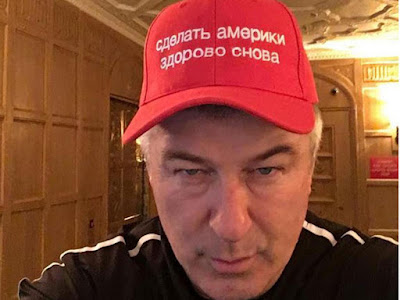 Donald Trump's designated chief of staff, Reince Priebus, says the Giant Orange Bloat accepts that the Russians hacked the election, the vote that he supposedly won, and that Trump may take actions in response.

Reince Priebus, the former Republican National Committee chairman, said Trump understands that Moscow was behind the intrusions into the Democratic Party organisations.

"He accepts the fact that this particular case was entities in Russia so that's not the issue," Priebus said on "Fox News Sunday."

While I wouldn't put anything past the Russians or any other hostile group I am suspicious of all the hacking claims. Due to the foibles of people, leaks are more probable - leaks and passwords so weak that your neighbour's kid could get by them. (Once, out of boredom, I broke into a "password protected" government computer - sorry but a blank space is not a password.) Would the Russians feed on any material that came their way? Probably. Set their best and brightest to break into Hillary's server? Why go to the trouble when her assistant used "password" as a password? It's more likely that some amateur got in and spread the word.

BTW, when it comes to interfering in other countries' elections, the US is top of the list of perpetrators.


I've covered the point of America's rich history of meddling in other nations' elections in a couple of posts, Toby.

Toby: The point is you lose fighting the last war. Cyber warfare is here and the Russians are winning.

Russia shut down part of the Ukranian power grid as practice but also as a warning. They also shut down telephone links so customers couldn't report outages. Us and Israeli hackers went after the Iranian nuclear programme with the Stuxnet virus. The US election showed that Russia had huge piles of data from all concerned and were ablr to feed it selectively to their advantage.
A cyber war is preferable to a nuclear war so these developements are welcome but the west needs to work harder and smarter to keep my lights on and my bank account secure.

Rumley, if I recall correctly, a US electrical utility, I think it was in Virginia, recently reported a hacking attack believed to be Russian in origin.

That was Vermont and it wasn't a big deal.

There was a piece quoted here not long ago that said the USA had interfered 81 times since 1945 in the governance of other countries. I believe that but, you know what, it doesn't matter. It doesn't matter because the USA never elevated a person who could turn the planet into a glowing slag heap because somebody pissed in his Froot Loops. It would appear that Russia has done such a thing.

Let that sink in for a moment. Now tell me again that it doesn't matter because both sides do it and besides it could have been anybody. I'll take the word of the intelligence community until it's proven otherwise.


Well put, Chris. You have captured the essence of this issue. Thanks.

If the Russians did hack the e-mail servers, so what? What are children like the DNC hierarchy doing putting such information and opinions in e-mails. They may as well have posted it on Facebook. (Virtually no e-mail can be considered absolutely secure. Be careful what you put in writing.)

And, I do believe it was not "the Russians" that published the e-mails.

Also, let's not forget James Comey - the FBI operative. Seems more like an inside job to me.

(Also, I seem to remember reading that Republican e-mail servers were also hacked. Maybe Wikileaks could post them now as well.)

The Russians are already here...

2017
They have achieved their objective. If the incoming US president is defending the Russians against his own intel people they've won. Now Vlad can continue to make Russia great again while we breathlessly await the next tweet from on high.

I'm with Chris and MoS here. I also think rumleyfips makes an excellent point as to why this is not something to be so dismissive of as some clearly are being.

BTW, it was her campaign manager whose email account was phished, and given his age, not that surprising especially since before opening it he actually asked his tech support and they gave him wrong information, so it isn't as if he just did it without any thought. HRC's assistant was/is married to Anthony Weiner, and it was his laptop where copies of HRC emails were found and used to throw the election to Trump by Comey 11 days out from voting day. Those are two very different email stories and situations you know. Credibility in an argument means in part being able to keep your basic assertions/facts correct, and here you clearly have not.

As to why go to the trouble? Oh, I don't know, aside from weakening a major competitor on the world stage, making sure that he does not face HRC whom he clearly had a major hate on for, and clearly feared in the Office of the President, which I would suggest is a good thing from the western perspective, not a bad thing? Making sure that the winner is the person most likely to destroy the international alliances which act as shackles on Russia doing whatever it wants, a la NATO? Destroying the last shreds of credibility to the idea of the American President being the leader of the free world and America being a nation of freedom? Just to name a few reasons that come immediately to mind.

Given the cost effectiveness ratio of using their best and brightest cyber warfare people versus any of these actions by other means, or getting these goals achieved via economic or military means using cyberwarfare in this manner is a no-brainer! I mean really Toby, this is right off the top of my head on a bad day when I'm in a lot of pain. This isn't hard to see why the effort would be taken for this!

You know, I get why some on the left tend to be suspicious whenever Russia gets fingered in American politics as a bad actor, I really do. But that doesn't suddenly make Russia any less dark and twisted a power broker and user on the global stage than our American neighbours, yet somehow they are being treated as such. In my view I see the Russians as worse in this respect because of the level of authoritarian control in their system backing it up versus the American system means they can actually use much darker means without much domestic consequences, unlike in western nations, even the USA.

The amount of desperation by some on the left to avoid facing this very ugly reality regarding the role Russia played in the election of Trump, and more importantly in the role of agents of destruction to Hillary Clinton with false news and massive propagandizing and turning her into Al Capone's reincarnation fused with being History's Greatest Monster because of emails that had nothing to actually do with criminality in any form... wow. Maybe it does make sense why some refuse to accept this now, because it would mean they have to face the truth that they were played all along. Reminds me of Dipper mentality in 2006/09/11 now that I think about it.

Craig Murray has been there done that and is worth time to read.