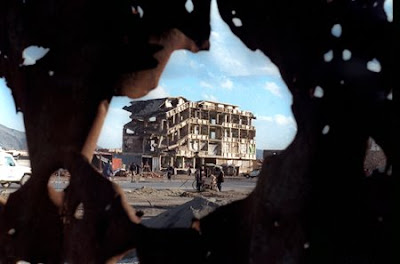 When I think of the word "emergency" I associate it with some situation out of the ordinary of unusual urgency. That was before Afghanistan.

An article published by the UN Humanitarian Affairs office, IRIN, describes as a "continual emergency."

“The staggering numbers also confirm a worrying trend: Afghanistan is experiencing significant, year-on-year increases in the number of families driven from their homes,” said Danielle Moylan, a spokeswoman from OCHA. “The numbers of IDPs in 2016 are three-fold that recorded in 2014, and six times more than recorded in 2012.”

Based on current trends, the UN predicts that in 2017 at least 450,000 more people will join those already internally displaced. On top of that, Afghanistan struggles to support many of the 616,620 people pushed back from neighbouring Iran and Pakistan last year. Pakistan has warned that it will begin forcibly deporting Afghans who have not left voluntarily by March, and the UN expects about a million more, many of whom have no homes to return to.

“The constant stream of displaced families means that a state of continual emergency has become the norm in Afghanistan,” said Moylan.

The New Kid on the Block - the Islamic State

The US nation-building exercise in Afghanistan is now a shambles, 16 years after it led the invasion that overthrew the Taliban. The US withdrew almost all of its troops at the end of 2014, and the Afghan National Army was meant to take over security. But government forces have struggled, and lost control of many districts, particularly over the past year.

Most territory lost to the government is under Taliban control. But by early 2015, IS had moved into eastern Afghanistan and announced its intention to carve out an area of control called “Khorasan”, in reference to a historical region that once covered much of modern day Afghanistan as well as parts of Iran and Central Asia.

The group, which is known as Daesh in Afghanistan, has concentrated its activities in eastern Afghanistan, especially Nangarhar, on the frontier with Pakistan. In some areas, local militias have sprung up to fight IS, while others have joined the Taliban or government forces. But IS has also extended its deadly reach throughout the country.

How much, if any, of Afghanistan's plight is our doing may never be known. We came, we saw, we shot it all to hell and then we left, passing the place to a corrupt, ineffective government and a hapless army. Did we leave it so weak, impoverished and exhausted that it became a magnet for the Islamic State? Chances are we'll never truly know. What we do know is that it was bad enough when we got there, worse when we left and steadily worsening in the wake of our departure.