Coming Apart at the Seams. Can Trump Lie His Way Out This Time? 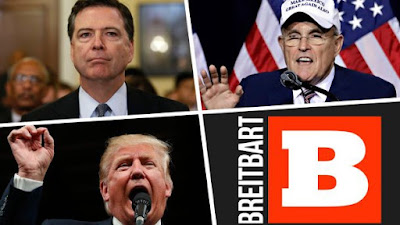 As scandals go, this one is really complicated. It involves a blowhard businessman/incoming chief of state of questionable mental stability and the sexual appetites of a goat; more than a couple of his closest aides (yes, that includes you, Rudy); a powerful and murderous foreign tyrant; espionage; the nation's top law enforcement agency and its director; the nation's intelligence and security services; foreign oligarchs and a broad range of crimes and perversions -for starters.

There is amazing scope for scrutiny. Details warranting investigation abound. Travel. Real estate deals. Financial transactions. Paper trails everywhere. Some of the allegations may never be entirely verifiable but the circumstances underlying them often can.

Here's an example. The dossier on Trump has cast a broad net. Among those caught in it are the Federal Bureau of Investigation and its director, James Comey. The US Justice Department has announced it will investigate Comey's curious behaviour during the election, acts that might appear to be politically motivated.

Among these is the disclosure of criminal investigations into the Democratic candidate's emails just nine days prior to voting day, while many Americans were going to advanced polls to cast their ballots. It beggars belief that would not have a significant impact on American voters, an impact not corrected when Comey sounded the "all clear" several days later.

Word is out that Comey acted due to threats from the New York FBI Field Office, the "Giuliani Brigade", that they would leak the details if he didn't announce them publicly. Rudy Giuliani went on FOX news  and practically cackled to let slip that a bombshell was coming that would turn the tide for Donald Trump. Of course, if Giuliani was either privy to these secrets or instrumental in them, he and several others may be facing felony charges. It would also support the argument that the FBI interfered in the election to throw the White House to Donald Trump.

Was the FBI, as widely suspected in the months prior to the election, in Trump's pocket?

Director Comey is also going to have to explain how he handled the Trump dossier, what he chose to reveal (nothing) and conceal (everything), and why.

Trump has already acknowledged that the Russians hacked the election to help him by damaging Clinton. If it now emerges that the FBI were corrupted to give him another leg up, his legitimacy as president is shaken to the ground.

At this point all Trump has to rely on is his credibility, his integrity. That's pretty scary.
Posted by The Mound of Sound at 12:13 PM

Credibility and integrity? Thanks for the laugh, Mound.

.. 'can he lie his way out' .. surely you jest.. (of course you do)
Trump has lied his way through life & its served him well !
If one's entire life is fabrication, fraud, bankruptcy, entitlement..
how does one fabricate it away?

Think more in terms of the late General George Custer ..
Joking with his officers, approaching a low rise at Little Bighorn
As I pointed out to one of your excellent blogging peers at Northern Reflections
Its surprising what one can find going over what seems a small rise
or better said.. what can find you coming over said rise
It can be hairlifting so to speak..

Yep, although pretty scary is one of the more massive understatements I've encountered in the last while. Russia was bad enough, but it was Comey and the FBI who were decisive on this, and it was not two different things so much as one landing on the other.. Namely the Russians saturated the "emails" ground, Comey was the one though that caused the landslide, or should it be mudslide with that saturated ground at just the right timing. Trump is not legitimate, he was never vetted by his own side, or worse the US political MSM once he became the GOP nominee, and there was clear outside foreign interference in the campaign on a massive level, and there was unprecedented unheard of and entirely understandable in effects if ever done intervention by the head of the FBI, something worse than J Edgar Hoover ever considered let alone doing, and that is some standard to fall below to start with!

But of course, Trump is the biggest, bestest, bigly no less, winner EVAH in the history of the USA. *sighs while rolling eyes*


What's been on my mind today, Scotian, is if, as has been suggested recently, the CIA was "in the bag" for Clinton while the FBI was in "Trumpland," what does this bode for future cooperation between these two vital agencies? Inter-service rivalries have created grave problems for America and her allies before. Had the CIA and FBI cooperated on the al Qaeda threat there's some chance that the 9/11 perpetrators could have been neutralized before they could strike. Has America come back to square one?