Even Americans Figure It Out - Eventually - When It Starts to Hurt 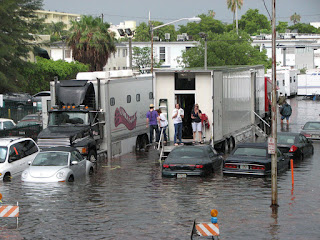 An increasing number of Floridians are coming to realize their state is facing a severe problem from sea level rise.  Held back by incompetent, ideologically-hidebound state governments, the people of Florida have been held back by a fullsome diet of empty assurances.

Lately it seems the public has had a small change of heart. There have been enough early-onset signs such as "sunny day" flooding that the reality of climate change and sea level rise can no longer be ignored or dismissed.

While they're fretting over what's to come they're now getting worried about what's likely to hammer them first - insurance costs. An article in the Sun-Sentinel explains their predicament.


Long before the invading sea reaches our homes, it could upend our region’s economy. And soon.

In just two or three years, Congress may change the way it sets rates in the Federal Emergency Management Agency’s National Flood Insurance Program (NFIP) to reflect more realistic assessments of risk, including the expected impacts of sea-level rise.

According to the chair of Miami’s Sea Level Rise Committee, FEMA officials believe the largest provider of flood insurance in the United States will be aligning the cost of premiums much closer to the heightened risks of flooding. And that the changes will come sooner than many expect.

... “This is a big game-changer,” Wayne Pathman says. “South Florida is ground zero, in many studies, for the economic impact of sea-level rise. So I’ve said many times that the tip of the spear of this economic issue is insurance.”

...The move to so-called “risk-based assessments” will likely jack up the cost of flood insurance to as much as wind-storm insurance “or more” in the next five to 10 years, said Pathman, a Miami attorney who is also chair of the Miami Beach Chamber of Commerce. He sees rates rising 25 percent to 60 percent in the near term, and more after that.

... As harsh as the consequences will be for our region, there are sound reasons to reform the federal program, which was created 50 years ago to help people affordably repair their homes after flooding. It is now $24 billion in debt and its authorization to issue new policies is set to end on July 31.

The program’s finances have been battered as floods have become more frequent, damage more extensive, and about 20 percent of the 5 million policyholders pay artificially-low premiums that don’t reflect the true likelihood of flood damage.

Against all common sense, those unrealistic rates encourage development in flood-prone zones. More than 30,000 properties have flooded an average of five times each and been rebuilt each time through the NFIP. Some of these properties have been flooded more than 30 times.

It's a devilish problem. Rising insurance rates may tank property values in the most flood-prone areas but, on the other hand, they will discourage irresponsible development that will only worsen the problems down the road. And there is a lot that can be done by way of adaptation; everything from raising roads to relocating development and essential utilities to higher ground inland. The state government won't like that because it has made Florida a retirement mecca in part by its "everyday low taxes" regime. These adaption strategies are costly and somebody has to pay. Then there's the problem of simply acknowledging the sea level rise threat which is bound to play havoc on property values in high-market, low-lying areas such as the Florida Keys. 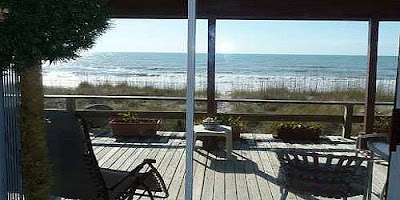 Many years ago I helped an old fellow, now deceased, get out of bankrutpcy. He'd been fairly well-to-do and decided to build himself a gorgeous retirement home on the waterfront in Texas. The dreamhouse was well into construction when the Texas coast got hammered by a hurricane that not only swept the house away but took the lot with it. What had been his property suddenly belonged to the sea. His assets were gone but, gee, those debts. No hurricane washes them away.

A lot of folks along the Jersey Shore and elsewhere, such as the Keys, the Barrier Islands of the Carolinas and elsewhere are facing that very same predicament. Things governments do that encourage others to jump in that same boat are beyond irresponsible.

Update: as reader, Cap, points out, Trump's beloved Mar-a-Lago (which Cap renames Merde-a-Lardo, is threatened by sea level rise. Someday it may look like this: 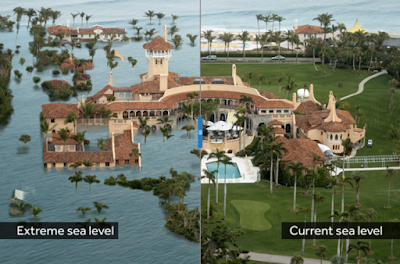 And, yes, Trump has his resort on federal government subsidized flood insurance.

With any luck, Merde-A-Lardo will be hit early and hard.

Trump will not be around to see the worse of climate change hence he and others of a same mind deny it's cause and effect.

A few builders in South Florida and out to Key West have taken a hint from the poorer places in the world; they build houses on stilts.


The City of Richmond, BC, has long had plans to elevate the most low-lying homes in that municipality by putting stilts underneath them.

Damn it those Yanks already knew the ending!!


That was not one of Costner's best films, TB.

Well, no, but that sailboat was gorgeous and epic. I forgave Waterworld many sins for that sailboat. It still had some left that I couldn't forgive, but it really helped.

Well that is good. Maybe they will begin to use their brain.


PLG, I never thought of it that way but, damn, you're right!


Ask and ye shall receive,PLG. It's an Orma 60 and there's a dandy example for sale in New Zealand right now for a modest 1.1 million USD only it's red over white with matching sails.


60 feet in length, 60 foot beam. Porta-potty not included. Moorage will be an absolute bitch.

Trump will call the picture of a submerged Mar a Lago ; a water feature!!

$1.1 million US sounds like a lot, but it's no more than a detached home in Burnaby. I could live on it, right? ;)


I couldn't find anything suggesting there is any accommodation on these things, PLG. No galley, no berths, not even a head.

Drat! My alternative real estate plot is foiled! Don't think my wife would have gone along with it anyway.